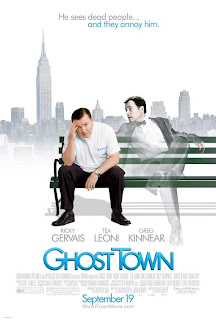 Ricky Gervais just can't seem to catch a break here in the States. Sure, the US version of The Office is one of the best shows on network TV right now, and he had bit parts in Night at the Museum and Stardust, but for the most part, Gervais is one of a number of British comedians for whom American stardom is still elusive.

Enter Ghost Town, a romantic comedy written and directed by Spielberg's go-to screenwriter David Koepp. The film, which has already fallen out of the Top Ten at the US Box Office, is a moderate success, if only for Gervais' quick witted delivery and the way he plays scenes opposite Greg Kinnear. As a straight comedy, this might have been a winner. As a romantic comedy, however, it's on shaky ground. 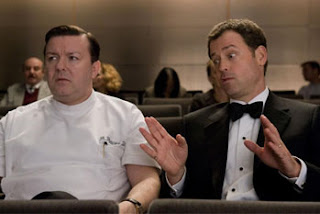 Bertram Pinkus (Gervais) is quite possibly the most bitter, disdainful person in all of New York City (and, I'm willing to bet, the world). He seems to be a successful dentist, but that's the only thing he's got going for him. After a near-death experience during a colonoscopy, Pinkus begins seeing strange people around town who only seem interested in following him around. These turn out to be ghosts. As the lead ghost, Frank (Kinnear), explains it, all these ghosts have unfinished business, and now that someone can see them, they're desperate for him to finish their business for them. Frank then cuts a deal with Pinkus: Stop Frank's wife (Tea Leoni) from marrying a complete jerk, and Frank will make the ghosts leave Pinkus alone.

You can imagine where things go from there. If not, shame on you. The second half of the movie plays out in typical rom-com style, but with a series of supernatural nudges that have all the subtlety of a jackhammer. After a very promising start, the movie quickly becomes a hybrid of Ghost and "Cyrano de Bergerac". For better or for worse, the only things keeping the film afloat are Ricky Gervais and Greg Kinnear. Koepp's script is very by-the-numbers in its approach, coming off more like a poor man's Stranger than Fiction (itself a poor man's Adaptation). Tea Leoni doesn't necessarily kill the movie, but she's clearly the weak link in the primary cast. As the love interest, Leoni is really given nothing more to than be pursued and then react. I fault the script rather than the actress. 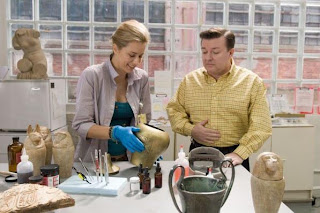 Another thing that bothered me more than it should have was the rules regarding the ghosts in the film. Now, metaphysics probably isn't the thing to get hung up on in a romantic comedy, but every once in a while something strange would jump out at me and make me start asking questions. For instance, if there are this many ghosts wandering NYC, there must be millions like them roaming the Earth. Is this some kind of statement regarding society's general selfishness? As we come to learn in the film, it's the living who have the unfinished business. After all, the dead are dead, so what do they care? I guess what I'm saying is that the film raises questions that you know it'll never bother answering. This is something to be analyzed in greater detail elsewhere.

Also, for as many ghosts as we end up seeing in this film, Ghost Town paints New York City as a woefully empty place. Sure, Pinkus' world is meant to feel lonely and isolated, but when you set your movie in New York City, I expect to at least see people walking the sidewalks, traffic jams, long lines, anything to show the populace of the city at large. Aside from a small handful of lead characters, Pinkus' New York is a largely hollow place. 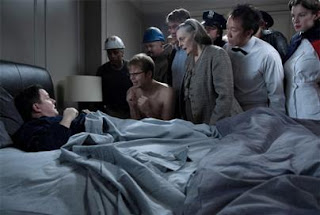 That's actually kinda how I feel about the movie. Good performances all around, but the final product exhibits an odd hollowness to it. In the hands of a better director/writer, Ghost Town might have been one of the better comedies to come out in several years. Instead, it seems content to settle for being mostly hilarious, yet modest in its ambition.