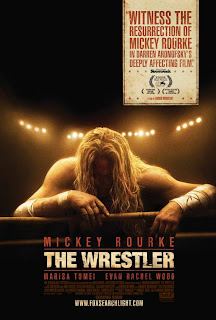 Everyone knows professional wrestling is fake. The matches aren't so much actual brawls as they are choreographed flips, turns, and slaps. What's real, however, is the physical and emotional stress that some of the combatants endure in and out of the ring. It's this aspect of the sport that director Darren Aronofsky's film The Wrestler chooses to illuminate, and to shocking success.

It's been 20 years since Randy "The Ram" Robinson (Mickey Rourke) was in his heyday. Today, he works weekdays at a supermarket and in the local New Jersey wrestling circuits on the weekends. Randy suffers a heart attack after a particularly brutal 'hardcore' match, and as a result, begins to re-evaluate his life. He attempts to court his favorite stripper, Cassidy (Marisa Tomei), who, like Randy, is also a performer whose work is suffering due to her age. At the same time, Randy tries desperately to reconnect with his estranged daughter (Evan Rachel Wood), and set up a reunion match with his former rival, The Ayatollah (Ernest "The Cat" Miller"). 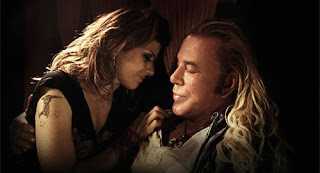 The Wrestler succeeds in not falling into any of the trappings usually associated with professional wrestling. All the wrestlers play their parts as heros and villains, heels and faces, but backstage everyone is just happy to be hanging out. There's no evil promoter trying to exploit his performers, nor any concern over ratings or ego. The Wrestler treats its culture of choice much in the same way that last year's Role Models treated LARPing: merely as the accepted way of things. And that's good. It means we can concentrate on the characters as real people rather than as cartoons.

After having tried his hand at science fiction in The Fountain (some find it incoherent, I think it's a beautiful film), Aronofsky gets 'back to basics' with The Wrestler. The film is shot very minimally. Shot on 16mm, lots of handheld shots, lots of static shots, zero CG. Stylistically, it bears more in common with his first film, Pi, than his other two films, and I think that was for the best. The story is a relatively small one about an equally small world, and the film reflects that nicely. Aronofsky restrains his style enough to allow the characters to develop naturally. 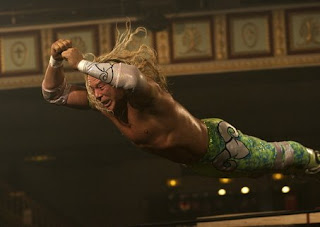 Which, again, was for the best, because once the movie ends, you'll be talking about Mickey Rourke's performance more than anything else. It's nothing short of magic watching Rourke throw himself 100% into The Ram. He's no doubt tapping into his own years as a 'has been' in order to show us just what Randy's going through. He plays the character honestly, realistically. Just when it seems that Randy's going to make it, he finds a way to screw up and put himself back to zero. We've all been there (in one way or another), and that's what makes the character work.

Rourke's been working consistently since 1979, but he's been on the comeback trail ever since he surprised everyone by being the best thing about Sin City. I'm sure he'll get his due come Oscar night, and he absolutely deserves it. Not only is The Ram one of the best characters of the year, but his movie is one that'll have you laughing and crying, cheering and cringing. The harsh reality Aronofsky puts on display here is every bit as entertaining as anything you're likely to see this year, and perhaps for a long time. Your mileage may vary depending on your tolerance for stripteases and a little bit of gore, but if you can stomache it, The Wrestler more than delivers. 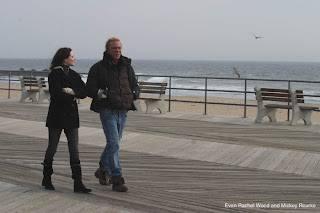