Food That Will Kill Me: The Twinkie Weiner Sandwich

In the world of junk food, there is a legend.  A concoction so equally beloved and reviled, that a simple google search will bring up hundreds of sites from people detailing their experience with the monstrosity.  I'm speaking, of course, of the Twinkie Weiner Sandwich.  Because I'm a glutton for punishment, as well as shitty food, I thought I'd try out this culinary disaster for myself.  And because I refuse to simply make one, eat it, and then tell you about it, we're going to treat it like an experiment!

1.  Define the Question: What does a Twinkie Weiner Sandwich taste like?

2.  Gather Information:  The most notable appearance of this nightmare fuel comes from the 1989 cult classic UHF.  Thanks to the powers of YouTube, we can watch Weird Al Yankovic himself prepare such a feast.

3.  Form a Hypothesis:  The Twinkie Weiner Sandwich is the most disgusting invention ever to spring forth from Satan's gaping maw. 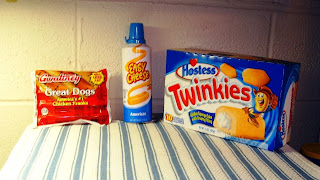 A pack of hotdogs, cheez whiz, and a box of Twinkies.  Serves eight (or nobody, depending on who you ask).  For the purposes of this experiment, and because I may not live that long, we're only going to prepare one. 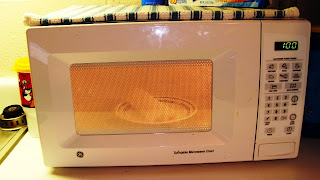 Wrap the hotdog in a paper towel and microwave for one minute.  The hotdog may whistle and generally sound like a lobster screaming bloody murder, but this is normal.  It's just the hotdog splitting in half. 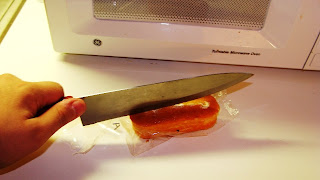 Next, split the Twinkie in half from underneath, in the shape of a hotdog bun.  You could probably just do this with your hands or a butter knife, but I decided to take the Tim Taylor approach.  WARNING: DO NOT LICK THE KNIFE WHEN YOU'RE DONE. 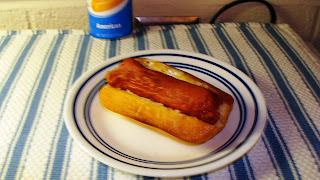 Place the hotdog inside the Twinkie. 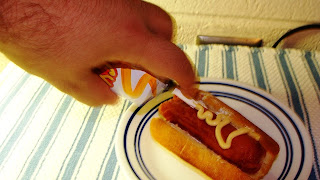 Next, apply the cheez whiz as desired.  I imagine you could replace cheez whiz with your condiment of choice, but I also can't imagine anything actually making this abomination any better.  If I had to guess at a more suitable replacement, I'd say...marshmallow cream?  Maybe? 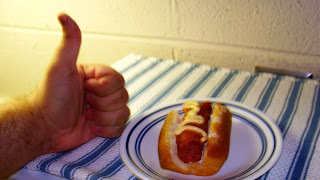 And now we enjoy the fruits of the Devil's Workshop.  The only thing we're not going to follow Weird Al on is dipping the Twinkie Weiner Sandwich in coffee.  Ugh.
5. Analyze the Data:  The first bite yields surprising results.  It's not quite the abomination I was fearing it might be.  The intense sugar overload of the Twinkie is balanced out by the equally high sodium content of the hotdog and cheez whiz.  The result is a surprisingly smooth sandwich thatOH GOD MY INSIDES ARE SCREAMING!!!!! 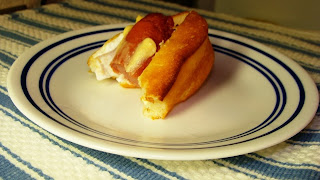 (Hours later)  I felt it necessary to at least finish eating the Twinkie Weiner Sandwich, which was a bit of a chore, as it was firmly in the middle of the food spectrum, between inedible and delicious.
6. Interpret the Data:  After the first bite sank in, things pretty much went south.  Compared to the taste, which was surprisingly not awful, my stomach reacted with a series of pangs and gurgles which would probably translate to "What the Hell is all this???"  The digestion process is accompanied by a wave of terror that can only be explained as the body's fight-or-flight response to the hardening of one's arteries.  Once it was all gone, there was only one thing that could cleanse the palate: 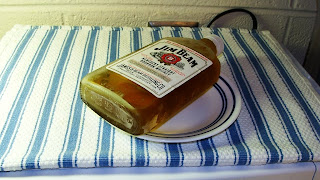 7. Draw Conclusions:  I do not recommend this disgusting thing to anyone.  I fail to see how anyone, least of all Weird Al Yankovic, can stomach such garbage.
Posted by JP_Wade at 9:46 PM

I want you to know that this makes me want to have your babies. Anyone who can survive this terror surely has superior genes. This post was genuinely funny and geeky and wonderful.

My only real regret is buying more than one Twinkie.

So will mortal sin, pal,
if let to fester N grow
too long:

1-outta-1 bites-the-dust, bro.
Dunno if yoo know that.
Apparently, you're so concerned
with your weeny you never had time.