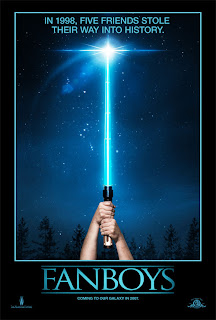 The late 1990s were a special time to be a Star Wars fan. The original trilogy was re-released in theaters. Sure, the additions Lucas made varied in quality. But more than that, there were rumblings of the absolutely unheard of. For the first time in fifteen years, it sounded like there might actually be a new movie -- no, a new trilogy -- on the way. Back then, we didn't know what to expect. There was no inkling in anyone's mind that the eventual trilogy would feature Hayden Christensen complaining about sand or Liam Neeson ruining the magic of The Force. Hindsight is 20/20, but back then you could've cut the anticipation with a vibro-axe. 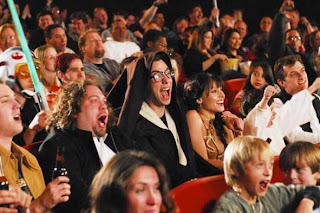 That's what Kyle Newman's long in the works Fanboys is all about. It's 1998, and Star Wars fans are holding their collective breath for Episode One: The Phantom Menace. Four friends hatch a plan to break into Lucasfilm headquarters and steal a workprint of the film, and each of them has their own reason for making the journey. Eric (Sam Huntington) wants to make peace with his best friend, Linus, who's dying of cancer. Linus (Chris Marquette) wants to go because he won't live to see the May 19, 1999 release date. Windows (Jay Baruchel) wants to go for the chance to finally meet his online girlfriend. Hutch (Dan Fogler) wants to go because it's his van they're driving. And Zoe (Kristen Bell) tags along because the movie would be a total sausagefest otherwise.

What follows is pretty much your standard road trip comedy, albeit with a severe Star Wars bent. The film hits every road movie cliche, and wastes no time in geeking out at every opportunity. Along the way, the guys have run-ins with gay bikers, a gaggle of Trekkies led by Seth Rogen, geek guru Harry Knowles (badly caricatured by Ethan Suplee), and more celebrity cameos than you can shake a stick at. 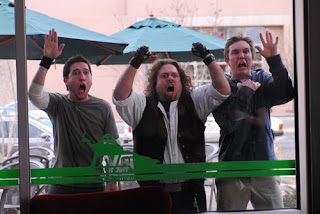 A movie like Fanboys really lives and dies by it's Star Wars jokes. Honestly, it's about 50/50. For every good joke or visual gag, there are an equal number Star Wars lines quoted out of context that are clearly meant to be funny, but simply aren't. Referring to your friends by saying "These aren't the droids you're looking for"? Really? Come on. Granted, there is one line involving a doctor that's pretty great, but other than that I could really do without these. Also, from a Star Wars fanboy's perspective, the movie sometimes seems too generic. Whenever a character asks another character a piece of Star Wars trivia, it's embarrassingly easy. It makes one wonder if the writers are really Star Wars fans at all. You guys couldn't do a little more research?

And overall, that's my biggest complaint with Fanboys. It ultimately feels too light; like they could've delved a tad deeper into the fandom. I'm not asking that they make a bunch of weird, obscure references to the expanded universe or anything, but a little true fanboyism might gone a long way. Of course, there is a fine line to walk. Go too geeky and you risk alienating casual viewers who don't know an ewok from a cooking wok. To their credit, each of the main cast acquit themselves well, especially Dan Fogler, who looks and acts like the fat little brother Han Solo never had. 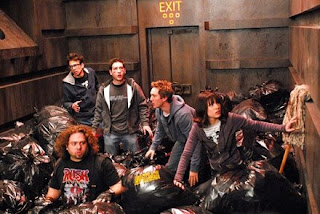 Much has been made of the "Linus has cancer" subplot, which Harvey Weinstein tried to cut out entirely a year ago. Star Wars fans went ballistic, boycotted Superhero Movie (how well did that really go over??), and got the subplot re-added. After all that mess, I'd say it was worth it. While it's remarkably light for such a depressing plot point, it works. It keeps the film firmly grounded as Eric and Linus' journey, rather than just about four dudes on a road trip. There is a decent payoff in the end, but it's almost entirely undercut when we learn what their initial feud was over in the first place.

Ultimately, Fanboys is sort of a "Star Wars fans only" affair, and while it doesn't have the R-rated teeth of a Sex Drive or even a Road Trip, it's definitely a fun little ode to the pursuits of one's youth. For fans, the movie is a nice reminder of the collective mindset of a decade ago. Even if you hated The Phantom Menace, you know you couldn't wait to see it. And if the movie has one ultimate success, it's in reminding us that Tom Petty was right. Waiting WAS the hardest part.