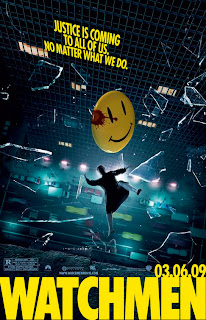 My initial gut reaction to Watchmen was a strange one. It is a good film, I definitely appreciated how they adapted most of the material. Parts of the film I felt worked fantastically. Other parts, not so much. While it's an easy film to appreciate, it is definitely not an easy one to enjoy. Like the book, the film is a dark, almost mournful thesis on the state and direction of our civilization. Overall, Watchmen is a very difficult film, and one that refuses to be dismissed lightly. And I think that's a good thing. One thing director Zack Snyder certainly cannot be accused of is selling the film's soul to Hollywood. The heart of the film is very much intact and, as anyone who's read the book can tell you, that heart is a heavy, distressed, and disconcerting heart.

The film takes place in an alternate universe where masked vigilantes are a matter of fact. The timeline delineates with the arrival of Dr. Manhattan (Billy Crudup), a physicist granted immeasurable powers thanks to an experiment that goes haywire. Thanks to Dr. Manhattan, and the presence of other crimefighters, Richard Nixon is still president (in the film's present, 1985), the US won the Vietnam War, and is inching ever closer to nuclear war with Russia. That's the climate in which the film's story takes place.

The plot proper revolves around Rorschach (Jackie Earle Haley), a sociopathic crimefighter investigating the murder of his colleague The Comedian (Jeffrey Dean Morgan). Their team, Watchmen, have long since disbanded and fallen out of practice, but The Comedian's murder, prompts Rorschach, along with his fellow Watchmen -- Nite Owl/Dan Drieberg (Patrick Wilson), Ozymandias/Adrien Viedt (Matthew Goode), Silk Spectre/Laurie Jupiter (Malin Ackerman), and Dr. Manhattan -- to solve the case before World War III erupts.

Of course, this is the briefest possible description of what takes place in the film's 163 minutes. The film takes great pains to incorporate as much of the graphic novel's dense material as it possibly can. And just like with Lord of the Rings, many fan favorites had to be left out. Dr. Long, Rorschach's psychiatrist, is present, but his story is not. Bernard and Bernie, newsstand vendor and comic reader are present, but again, their story is not. "Tales of the Black Freighter", the comic Bernie reads in Watchmen, is nowhere to be seen (though, to be fair, it will be released in the coming weeks and reinserted in the film on DVD). There are many other parts of the book that are alluded to, but never given full consideration. 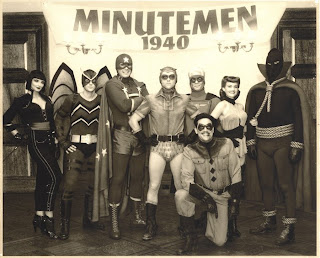 The film works perfectly fine without any of these things, though I might argue that it loses a bit of the flavor that made the book such a rich experience. Then again, Zack Snyder and his team acquit themselves well of creating their own rich experience. Whereas Alan Moore and Dave Gibbons used the book as an opportunity to play with the telling of a comic story, Snyder pushed a few filmic boundaries, and brings the story to life in a way that only a film can. The greatest example of this is in the opening credits, a sequence in which we see the entire history of masked vigilantes in a series of moving tableaus, from rise and fall of the Minutemen of 1940 to the formation and eventual collapse of the Watchmen, all set to Bob Dylan's "The Times They Are A-changin'". It's a wonderful way of bringing image and song together to create new meaning but, sadly, the film rarely reaches such heights again.

Thematically, the concepts that Moore dealt with in his story are all mostly present and accounted for. The problem is that Snyder only presents them, never following through and exploring them. We get that each of the masked crimefighters have their own demons, that none of them (even Dr. Manhattan) are perfect, but it's left to the viewer to decide what any of it means. Snyder's film feels like a teenager retelling the comic's story but never quite grasping what Alan Moore was trying to say. Is the murderous, yet righteous, Rorschach supposed to be the film's moral center? Are Ozymandias and Dr. Manhattan right in their assessment of mankind? Or should we side with Dan and Laurie and just try to concentrate on our own lives? In refusing to take sides, the film comes across as sort of nihilistic, even afraid to commit to one ideology. Then again, the same can be argued of Moore's original story.

The ultimate conundrum is that this is a lot of baggage for what is being marketed as a $100+ million action movie. People going into the film expecting more of the same from "The visionary director of 300 and Dawn of the Dead" are in for a rude awakening. Yes, there is quite a bit of action and gore. Yes, the film has a fantastic aesthetic to it. And yes, it's every bit as successful in its adaptation as Snyder's previous films. But rather than being energetic, Watchmen plays out more like a requiem to a genre that may have seen it's last hurrah.

Ok, ok. I've talked a lot about the big issues surrounding Watchmen. And you've probably guessed that I found a lot to enjoy about the film. So, in a nutshell, what works? Jackie Earle Haley as Rorschach. The visual effects. Snyder's choice of pop songs for key scenes. The (mostly) slavish faithfulness to the book. 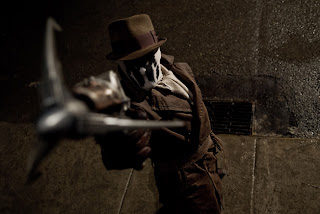 What doesn't work? For one, I can't tell if the aging makeup on Richard Nixon and Sally Jupiter (Carla Gugino) was meant to be cartoony or not. It's painfully obvious. Like most people, I think the plot falls short in the final 15 minutes. The change made to the film's big twist may be less ridiculous, but that doesn't mean it works any better. It raises its own red flags and illogicalities that are just too big to ignore. Also, the film is long, and occasionally feels it. Even if you've read the book, you may find yourself waiting for the next action beat, because certain scenes just seem to drag.

Overall, Watchmen is a faithful adaptation to what was once considered an unfilmable book. Given the legal struggles, narrative hurdles, and numerous false starts over the years, it's a small miracle that the film even exists in the first place. It is definitely a sight to behold, and an experience that I look forward to having again soon. However, it is not at all uplifting or life affirming. It's a brave film with a morally ambiguous ending, and even though the ending might not be great, the journey to get there is thought-provoking and engaging.

Watchmen is definitely not for everyone. Those with a strong stomach, a keen eye for detail, and a working knowledge of literature (not just comics) will get more out of Watchmen than those just looking for a good superhero yarn.