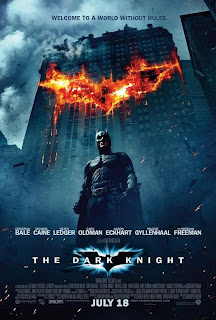 When discussing this movie, it can be easy to slip into a lot of hyperbole, especially when most of the critics out there have already had their say, and seem to pretty much agree that The Dark Knight is the best superhero movie ever made, the best crime thriller of the year, and perhaps the best movie of the year. To which I say: It's definitely a possibility. I want to wait and see what the rest of the year has to offer before making such bold claims. For the most part, however, I completely agree with the majority opinion.

The Dark Knight is not just a behemoth of comic storytelling, it's also a complex study of morality and duty in the face of terrorism. In a summer of (mostly) exemplary superhero films, The Dark Knight caps off the summer of 2008 as perhaps the greatest summer for geek cinema since 2005, if not longer.

It's been a year (presumably) since Batman (Christian Bale) took out Ras al-Ghul in Batman Begins. With the help of Lt. Gordon (Gary Oldman) and Gotham's 'White Knight', new District Attorney Harvey Dent (Aaron Eckhart), Batman's taking down the mob one gangster at a time. Enter The Joker (Heath Ledger), a scarred and clownfaced sociopath who just wants to 'introduce a little anarchy' and kill the Batman. His asking price: 50 percent of the mob's next big transaction. 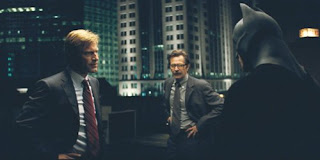 This plot would've been a perfectly acceptable plot for a Batman film (or any other film, really), but the brothers Nolan don't stop there. With Batman's origins sufficiently dealt with, more screen time is open for more plot, and we get a substantial subplot concerning Batman/Bruce Wayne's interest in Harvey Dent, as well as The Joker's interest in both of them. It's clear early in the film that The Joker's plan is, essentially, to destroy Batman's entire image, to make him break his one rule. However, that he figures Dent into this equation is a masterstroke, and proof that The Joker, and director Christopher Nolan is considerably smarter than you, the viewer.
The film consistently stays one step ahead of you at any given time, playing very conservatively with it's elaborate bag of tricks.

Probably nothing in this film is more talked about than Heath Ledger's swan song (though not his final) performance as The Joker. It's certainly a sight to behold, and he's terrifying and terrific in the role. He plays The Joker not as a character with an established history in Gotham City, but rather a force of nature that comes to town seemingly to wreak havoc. Unlike the manic clown portrayals of Cesar Romero, Jack Nicholson, and Mark Hamill, Ledger plays him like a man who simply listened to one too many Megadeth songs as a kid and took it all a little too seriously. His Joker is a man who, unlike Batman, truly has no limits. He is not above killing people in gruesome ways just to make a point (or not, whatever strikess his fancy), and you can always see the gears turning just behind his black, hateful eyes. When The Joker makes a joke, you absolutely loathe yourself for laughing along, and by the end of the film, you want Batman to exact bloody, horrible revenge on him.

This, in the end, simply proves his theory, that even the most noble of individuals can be turned into a ravenous dog if pushed hard enough. With this in mind, if you even have a passing knowledge of Batman lore, you know how things are going to play out. What keeps things from stagnating and turning into another by-the-book comic book film is the grandiosity of it all. What The Joker does to Batman and Harvey Dent is the kind of villianous plotting that would make Shakespeare and Sophocles proud.

And yet, for all of the film's technical proficiency, Oscar-worthy performances (both Eckhart and Ledger deserve consideration for Best Supporting Actor), and epic grandeur, it never forgets to play by the rules of a comic book. Batman enters and leaves a scene in the blink of an eye. Batman, for once, does a bit of honest detective work. On more than one occasion, The Joker concocts a scheme in which Batman must choose to save one victim over the other. The Joker can appear in any place at any time, and when he does, he's accompanied by one of the most simplistic yet utterly bone-chilling pieces of orchestration since the theme from Jaws. 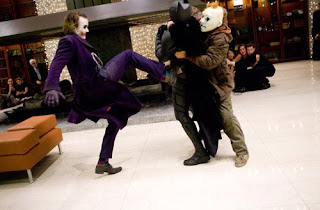 Michael Caine, Morgan Freeman, and Gary Oldman are all back to fill their respective roles, and each brings a suitable amount of gravitas to their roles. Of the three, Oldman gets the most to do, and he takes Lt. Gordon from being the bumbling officer of all the previous films (including Batman Begins) and turns him into a badass detective, the kind that deserves to be made commissioner. Maggie Gyllenhaal replaces Katie Holmes as the assistant D.A., a role that she doesn't necessarily perform better, but simply looks the part better than Holmes did in the last film. For a change, her story arc in The Dark Knight actually holds some weight to it, and tugs at more than a couple heartstrings before all is said and done.

Each character gets a fair shake here, and the cast makes perfect use of their screen time. Admittedly, Nolan's film is considerably more serious than most (if not all) of the superhero films in recent years. And the film isn't for everybody. Personally, I wouldn't dare show The Dark Knight to anyone under the age of 13. The film does indeed earn it's PG-13, and it's sometimes hard to see how exactly it escaped an R rating. If I have any complaint about the film, it's that it's many subplots sometimes seem to be cut between at random. A little more time in the editing room might have done this film some good.

But at the end of your 150 minutes, you're guaranteed to be challenged, angered, provoked, manipulated, and above all else, entertained. Only time will tell if The Dark Knight is truly the best film of the year, but as it stands now, it's at least in the decade's upper echelon. If Nolan and co. can find a way to break the second sequel curse, I'll be the first in line.

...But it'd better work this time.