There will be spoilers below. Fair warning. 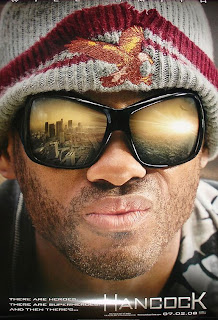 "You deserve better from me. I will be better." Such is John Hancock's declaration early into Will Smith's latest 4th of July blockbuster. Sadly, 'better' is not what we get. Instead, we get a frustrating mess of a movie that doesn't know whether it wants to be a deconstruction of superhero archetypes or simply a more aggressive spin on what we've already seen done better three or four times this summer.

On the surface, Hancock offers a lot to enjoy. Though director Peter Berg does tend to subscribe to the 'closeup shots must be handheld' school of directing, the film looks pretty great. The visual effects are consistently impressive, incorporating both practical and CG work very nicely. The principal cast are all in fine form, too, particularly Will Smith as the titular hero and Jason Bateman as his all-too-willing public relations man, Ray. Both men dive headfirst into their characters and, more often than not, are a lot of fun to watch. But the same problem that Wanted had last week somehow plagues Hancock and all but derails the film entirely. 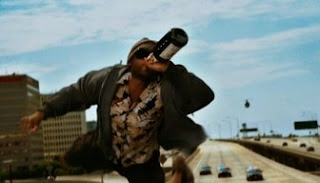 I'm talking, of course, about the lead actress. The way Charlize Theron plays her character (Ray's wife, who secretly knows Hancock better than anyone else) is fine. The fact that an A-list actress like Theron plays the character in the first place is the problem. The problem in this instance is the fact that her character is the film's one and only twist, and once we see Charlize Theron onscreen, we know something's up. It doesn't take a genius to figure out where things go once she enters the picture. Theron's character is indicative of the real problems with Hancock, which are more structural than they are visual.

It doesn't help that when she starts explaining the backstory to Hancock (and to us), everything out of her mouth is more preposterous than the last thing she said. It turns out that she and Hancock are the last in a long line of gods 'built' on Earth for a further unexplained reason, and that Hancock in particular was 'built stronger' to protect the people of Earth. Never mind that, earlier, Theron gloats about how she's so much more powerful than Hancock. Never mind a half dozen other points that are completely incongruous with what's already come before. 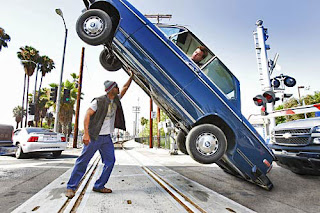 The 'super couple' plot might have worked if it had been the film's only major story. As it is, it's built up as a B story that eventually takes over as the A story, after they'd already set up a plot about Hancock's PR makeover, which by itself was very interesting. That right there, coupled with an exceptionally interesting character in Jason Bateman's Ray, would have been an excellent jumping off point if they'd wanted to give us a true deconstruction. Superhero politics and public image counseling would have launched Hancock into a level of superhero satire alongside Mystery Men and The Incredibles.

Instead, the movie drops this line of satire early in favor of the plot involving Charlize Theron's character, which ruins any chance for Hancock to be about something more than superhumans breaking shit and cursing like sailors while doing it. The writers, producers, director Peter Berg, et al seem content to offer us a fascinating premise, only to renege on it in favor of cheap (yet well executed) thrills that ultimately mean nothing more than eye candy. 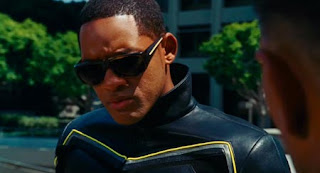 This problem is further compounded by the fact that Hancock clocks in at a lightning fast 92 minutes. In trying to tell these two stories, one is rushed through in order to shoehorn in the second, less interesting story. I doubt any well-made movie can accomplish a feat like this. Let's not forget that Spider-Man 3 tried the same thing last year, and it was nearly three hours long! So if a hodge podge of neat ideas and tons of cool effects are your idea of great summer entertainment, you might enjoy Hancock quite a bit. I, on the other hand, expect more from my superheroes, not to mention the films in which they appear.

Hancock looks like interesting spin on the latest superhero movie craze... at least Will Smith tends to be pretty funny