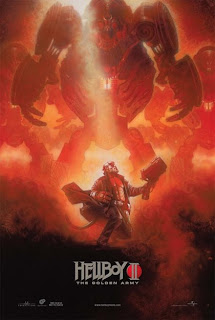 Guillermo del Toro is quickly becoming my favorite current director. I was introduced to his particular brand of madness four years ago when I took a chance on the original Hellboy. Not only did that film turn me on to the comics (which themselves are some of the best stories in comics today), but it also introduced me to a man who wasn't afraid to put anything up on the screen, no matter how grotesque and strange it may be. With Pan's Labyrinth, he proved he could meld his brand of weirdness with the kind of fearless storytelling that modern fantasy films desperately needed.

In Hellboy II, del Toro shows that he can use that same style to tell a whiz-bang kind of adventure that not only gets the adrenaline pumping, but also tugs at a few heartstrings and stirs the imagination all at the same time. The film opens in the 1950s, where we meet a young Hellboy getting a bedtime story from his adoptive father, Dr. Broom (John Hurt, back from the first film). Broom tells him about the ancient war between the humans and the realm of the fantastic, in which the forest king's Golden Army lays waste to thousands of human armies before a truce is struck and the Army is put to rest. 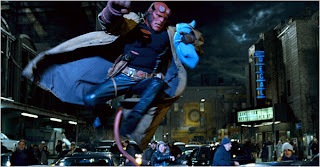 Cut to the present, in which Hellboy (Ron Perlman) and Liz Sherman (Selma Blair) are struggling in their relationship in their home at the Bureau for Paranormal Research and Defense. After an investigation goes awry, a new agent is sent to the BPRD to straighten things out. This turns out to be Johann Krauss (voice of Seth MacFarlane), a gaseous being housed in a diver's suit. Meanwhile, Prince Nuada (Luke Goss), son of the mythical forest king, sets out to declare war on humanity and awaken the Golden Army once again.

What may sound like too much plot for one film is actually handled very deftly, never letting things slow down enough to become boring. It helps that the film was written by director Guillermo del Toro and Mike Mignola, the man who created the character in 1993. And it's here that the film takes a hard turn away from all the other comic book movies of recent years. So many of these films try so hard to adhere to the source material, that they inevitably feel too bound by the colored page. X-Men: The Last Stand and Spider-Man 3 ran into this problem. Instead of following the continuities or stories set down in the comics, del Toro and Mignola decided to create a completely original story for their characters. This story honors what has come before, yet forges it's own identity and path, but at the same time never betrays the essence of the comics. From a strictly narrative and thematic standpoint, Hellboy II is more faithful to the heart of its source material than many films that try desperately to stick to the comics. 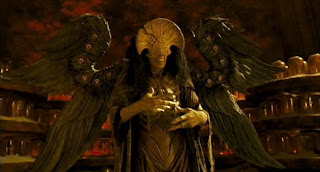 All of the Lovecraftian notions of the first film (and the comics it is based on) are still hinted at here, notably in a scene featuring the Angel of Death (Doug Jones, pictured above), and hint at where a third film might eventually go. But here, we get to see things that not even the Hellboy comics can offer us. Hellboy saving a baby from the clutches of a giant, tentacled tree monster; the troll market, which offers more eccentric creatures and goblins than the Mos Eisley Cantina; Johann corporeally inhabiting a tooth fairy (and several other, more thrilling things); the list goes on. For every great idea that Hellboy II offers, it gives us an equally brilliant special effect, and more often than not the effect is achieved with intricate makeup and animatronics rather than the CG cop-out.

And yet, for all of the film's technical and thematic wizardry, the cast imbue their parts with real emotion. Not a single person here is phoning in their performance. It feels as though each and every one of them truly cares about the character they are portraying, whether it's Perlman in the horns and red makeup or Seth MacFarlane pulling a convincing German accent or Luke Goss, who paints Prince Nuada as a more sympathetic character than one might expect. Each character is given their moment to shine, and each actor seized the opportunity. 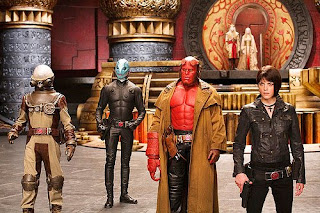 Hellboy II: The Golden Army is an amazingly fun flick that makes us thing about the world and our place in it much in the same way that WALL-E did a few weeks ago. If the film has any misstep at all, it's merely in the inconsistencies and plotholes that plague any fantasy story. One need only accept these as part and parcel with the genre in order to overlook them. In the end, Hellboy II is the kind of fist-pumping fantasy storytelling that comes along maybe once or twice a year. If you're a fan of the comic, or simply fantasy film in general, you owe it to yourself to see this film.

I loved every single minute of Hellboy II, and I can't wait for del Toro to make The Hobbit, if only so that I can see how things turn out for HB, Abe, Liz and everyone else at the BPRD.