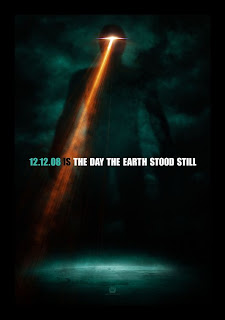 I feel like I'm being thrown onto the defensive for a film that I really didn't think was that great, which is an odd position in which one might find themselves. The Day the Earth Stood Still isn't great cinema by any stretch of the imagination, but I feel like many critics are too quick to slam the movie simply for being a remake of the 1951 classic. Yes, this is a remake. Yes, the original was (and still is) a classic. But does that automatically make the remake a bad film? No. If that were the case, The Thing, The Fly, The Blob, Invasion of the Body Snatchers, and Dawn of the Dead would all be bad movies, and the truth is that all of these are at least solid films; some of them great.

However, the critics who hate The Day the Earth Stood Still seem to truly hate it. It's not that bad. The basics of the film are largely intact. Scientists detect a large object on a collision course with Earth. Instead of colliding, as originally predicted, it lands in the middle of Central Park. Of the myriad scientists and military personnel sent to intercept and study the object, the first to make contact with it's inhabitant is Dr. Helen Benson (Jennifer Connelly). Once in military custody, the alien, who identifies himself as Klaatu (Keanu Reeves) and has taken on a human body, informs them of his intention. He represents an interplanetary council, and was sent to Earth to assess the human race's case for survival. It is for him to decide whether the human race is fit to continue. Klaatu is accompanied to Earth by a gargantuan robot that the US military names GORT (Genetically Organized Robotic Technology, or something equally ridiculous). While Dr. Benson and her adopted son Jacob (Jaden Smith) flee with Klaatu, the military tries its best to destroy GORT to no avail. 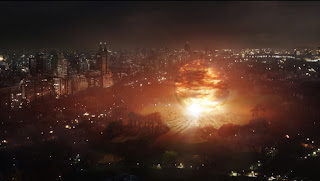 Yeah, a few things have changed, but the basic song remains the same, as it were. What the film ultimately gets dead-on right is the tone and visual aesthetic. There is a constant sense of foreboding looming over any given scene, and it adds a significant amount of weight to a script that doesn't seem to bother with subtelties. The designs of the orb spacecraft are intriguing, and are decidedly different from the alien designs that have come before. We've come a long way from flying saucers. Then there's GORT. The design team did a pretty good job of updating him without ruining his imposing nature. Rarely do fully CG creations come off successfully. GORT works wonderfully.

And say what you want about Keanu Reeves, but the man does alright for himself as Klaatu. He looks uncomfortable here, just like an alien who isn't used to a human body. His monotonous speech pattern is equally stilted and uneasy. Of course, I'm not sure how much of this is Keanu simply refusing to emote or what, but (at least for me), his performance worked. The same cannot be said of Jennifer Connelly. She's gorgeous, as always, but she looks equally lost in this film. The supporting players that come off best here are, undoubtedly, John Cleese and Kyle Chandler, who do well with their limited screentime. 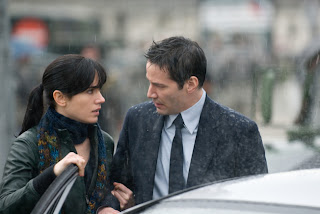 What doesn't work so well? The script. For as much foreboding tone as the visual crew add to the film, it seems like they had to compensate for the script, which holds next to no dramatic tension. The emotional arc that Klaatu must travel through the course of the film is layed out through dialogue in such a way that we're basically given a roadmap to the film every 10-15 minutes. One scene in particular, one that takes place inside a McDonald's, might as well be counted as a spoiler, that's how on-the-nose the dialogue is. And for a film this rooted in classic science fiction, there are far too many tiny plot holes. Why would you leave an alien being, whose abilities are not known, alone in a room with a defenseless examiner?

I have an idea for what they perhaps should have done with this film. Instead of a straight remake of the original that merely updates the theme of nuclear annihilation to environmental destruction, why not make the film a sequel? The film could have been about the return of Klaatu, fifty-seven years after his first trip to Earth, to issue us his final ultimatum. In 1951, he gave us a choice: change our destructive ways or die. In 2008, we've replaced one global threat with another, and now that Klaatu is back, it's time to pay the piper. He sets the destruction of Earth into motion, and must be convinced otherwise at the zero hour. Would this not have worked? I think so. And it wouldn't have been at the risk of damaging the original. It would be sort of the extra-terrestrial equivalent of George A. Romero's zombie cycle. I think that could have worked... 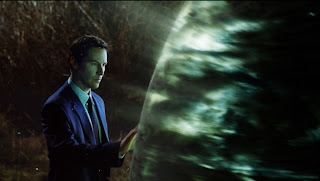 Ultimately, however, The Day the Earth Stood Still is not the piece of cinematic garbage that many critics seem to think it is. Sure, it's not a classic by any means, but neither is it a contender for Worst Film of the Year. Had this script gone through maybe one more revision, the result might have been a tight, thematically sharp sci-fi parable. As it is, however, The Day the Earth Stood Still is a mildly engaging sci-fi yarn for those willing to lend an ear, two hours, and seven dollars.

I'm glad to hear you enjoyed it, because I thought it might be at least a little enjoyable. That, and I seem to be one of the few people who isn't bothered by Keanu Reeves.... Lawl. Plus, I hardly trust critics on sci-fi films. Let alone remakes.

It's definitely worth a look, but don't get your hopes up too high.