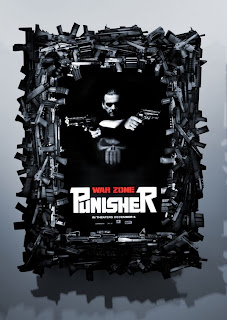 Punisher: War Zone is not a good movie. However, Punisher: War Zone IS a good Punisher movie. There were certain elements about Jonathan Hensleigh's 2004 film that I enjoyed (particularly Thomas Jane as Frank Castle), but it's mostly a forgettable film. And the less said about the 1989 Dolph Lundgren film, the better. But I feel like there's actually something to be said for this film. It's not great cinema, but it's actually fairly successful, considering the film's pedigree.

Rather than a sequel, this is the third time out for Marvel's own dark knight. We already know how Frank Castle (Ray Stevenson) lost his wife and children at the hands of gangsters. He's spent the six years since that day out to stop crime at all costs. After Castle kills an undercover cop during a raid on mob boss Billy Russoti (Dominic West), he makes it his duty to protect that cop's wife and daughter from Russoti and his goons. 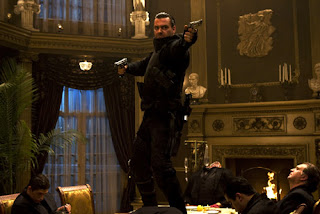 It's a pretty basic plot, but one that Punisher comics have been dealing in for years. Ultimately, Punisher: War Zone is a painfully familiar revenge thriller, but what makes the film at all interesting is the fact that it's definitely a comic book film. The violence and gore (and there's a lot of it) is over the top to the point that it's cartoonish, hilariously so. For every gut-wrenching kill, there's one that can't be anything but a joke. At the same time, it's no more violent than anything found in the comics. Which is a good thing, since War Zone is about as close to a Garth Ennis/Steve Dillon comic as any film will probably ever get. Vibrant, colorful backdrops, deep blacks and wild explosions. Everything a typical Ennis/Dillon comic offers is on display here. And it looks great.

The other thing the movie thankfully gets right is in recasting the Punisher himself. While I do wish Thomas Jane had returned for this film, Ray Stevenson does an admirable job of filling his shoes. While he's not necessarily a better actor, he's not bad. Plus, he looks more like the character than Thomas Jane ever did. At the same time, Dominic West is a lot of fun to watch as Jigsaw, Russoti after a particularly gruesome run-in with the Punisher. Jigsaw and his gang are the most outlandish things in this film, almost single-handedly elevating the film's goofiness to the level of Batman Forever or Spawn. 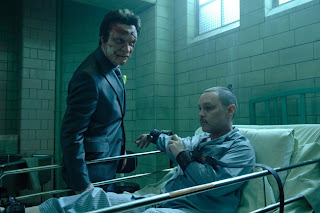 Ultimately, that's my final thought on the film. Punisher: War Zone hearkens back to the action films of the mid-to-late 1990s, and is good at what it does. The thing is, the movie is too bi-polar for its own good. There are scenes when it's too mean-spirited, then scenes when it's just too silly (Jigsaw gives a hilariously rousing speech in front of the American flag). If you're into The Punisher, or Marvel Comic films in general, you'll probably get a kick out of Punisher: War Zone. If The Punisher isn't your thing, then you won't get anything out of this movie.