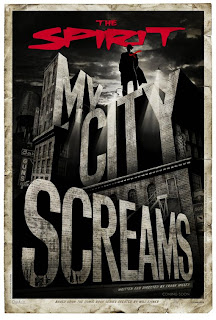 Almost immediately, the vast majority of viewers have been dismissing The Spirit as worthless garbage without a second thought. That's just not fair. It's not a bad movie. Different? Sure. Bizarre and resembling little of Will Eisner's original comic? You betcha. The Spirit isn't so much Sin City-lite as it is Frank Miller applying his comic sensibilities to a medium that's still new to him. And in that respect, The Spirit simply suffers from a novice filmmaker's first turn behind the camera.

Denny Colt patrols the streets of Central City as The Spirit (Gabriel Macht), a sort of unkillable vigilante (think Batman in a suit and fedora, sans gadgets). His archnemesis, The Octopus (Samuel L. Jackson) is after a vase containing the blood of Hercules. In his way is Sand Seraf (Eva Mendes), a globe-trotting jewel thief who is after her own mysterious, mythical object. She's got her own history with The Spirit, and the movie spends plenty of time explaining it in a strange, mid-movie flashback.

Stylistically, the movie heavily resembles Sin City more than anything in Will Eisner's comics. Miller's playing with more or less the same style as Rodriguez' film. The only difference here is that it moves more like a comic. As The Spirit runs along power lines and hurls manhole covers at countless thugs that all look like Louis Lombardi, it all moves like a cartoon.

And really, that's all this movie is aspiring to. It's absolutely a cartoon, and Frank Miller is indulging (most of) his comic and cinematic desires. It's clear taht he's not taking this material seriously. Otherwise, Eva Mendes wouldn't have photocopied her ass, Samuel L. Jackson and Scarlett Johannson wouldn't have donned Nazi uniforms, and the blood of Hercules would never have figured in as a plot device. 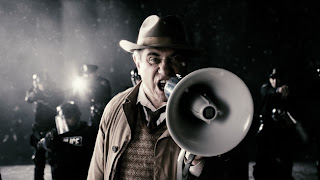 There's no logical way to take this movie seriously, and it's for that reason that I'm pretty sure this movie is a comedy. Not a jokey comedy, mind you. But a Frank Miller comedy. See, Frank Miller loves film noir; enough, in fact, to be goofy and weird with it. Every time someone gives a ridiculous line delvery (or rather, says something totally ridiculous without a knowing wink), it's funny. It's supposed to be. I think it's a symptom of this movie being horribly mismarketed. People are going into this thinking it'll be a repeat of Sin City (which itself was really, really silly).

The Spirit is a comedy in the same way that I'm pretty sure Spider-Man 3 is a comedy. It's more of a parody of the genre than an honest stab at it. But, as with Spider-Man 3, the problem is in the direction. Miller's not at all an experienced director, and he doesn't have the deftness of Sam Raimi or Robert Rodriguez. There are many shots and cuts that don't really work, and occasionally it's really hard to tell who is punching out who and where the body is flying. Some of the action just doesn't work. As for the script, the film plays out much in the same way that a comic book does. Whole passages of the film veer off into odd tangents, almost like that middle issue of a series that has little to do with the story. Of course, just because it's there doesn't mean it really works. It kinda doesn't. 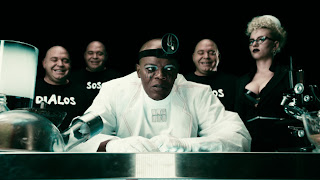 But for all it's comic sensibilities, goofy sense of humor, and overall weirdness, The Spirit is not the cinematic abortion that many people might lead you to believe. On the contrary, it's one of the strangest films you're likely to see all year, and it's worth seeing simply for the sake of being different. It's odd and goofy enough to entertain, but definitely not the second coming of Sin City (though that film is apparently still in the works). It's fun. I enjoyed it, and I hope more people find something to like about it.