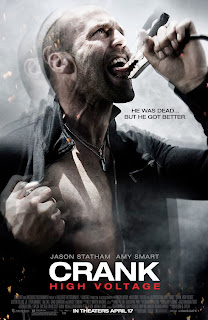 Not every movie is for every audience. That's a pretty well understood fact. Probably no other film in recent memory exemplifies that fact better than Crank: High Voltage, a film that takes every wacky excess of the original Crank, dials it up to eleven, and then sets the whole thing on fire just for kicks.

So if you've seen the poster, you pretty much know the story. Chev Chelios (Jason Statham) died. But then he got better. After falling from a helicopter at the end of the first film and bouncing off a car, Chev is scraped off the pavement by the Asian mafia. He wakes up a couple months later in a crappy operating room with an artificial heart and his own in a cooler halfway across town. The movie then follows Chev as he rampages across Los Angeles, searching for the man who stole his heart and attempting to keep his body charged any and every way possible.

The first thing to note about Crank 2 is that everybody from the original is back. And I DO mean everybody. There are cameos out the wazoo; even Efren Ramirez is back playing the psychotic twin brother of his character from the first film (and just because his character was apparently not crazy enough, they decided to give him "full body Tourette's"). The movie is full of bizarre callbacks to the first film. There are more crazy 'juicing up' sequences; there's another weird public sex scene; ridiculous escapes and shootouts; it's all here. Crank: High Voltage is pretty much everything one might expect from a sequel to a movie like Crank.

But is it a better film? Not really. Sure, it's loads more fun, it's crazier, and a hell of a lot funnier. But it doesn't really build on the foundation of the original, just continues it's mad descent into lunacy. For me, the climactic fight scene felt like a bit of a letdown. Then again, when your first film ends with the hero and villian falling out of a helicopter, you're gonna be hard pressed to top that. But damn, if they don't try. Depending on your taste for over the top, cartoony action, the final shot of the film will either leave you disgusted or laughing your ass off. I fell into the latter.

There's so much about Crank: High Voltage that I want to talk about, but I feel like mentioning any of it might spoil it for anyone else. Suffice it to say, the trailers only show a fraction of the strange things you'll encounter in this film. With an equally twisted musical score composed by Mike Patton, Crank: High Voltage moves and spazzes out like a speed freak in a candy store, and if you enjoyed the first film at all, you'll definitely get a kick outta this one. Is it great filmmaking? No. But writer/directors Neveldine and Taylor and Jason Statham know exactly what they're doing, and it's one of the most fun, aggressive, and wacked out action films ever made.

And just for fun, here's a bit of Mike Patton's score: