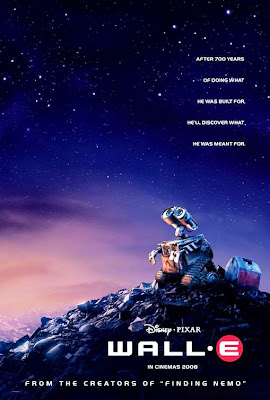 Leave it to PIXAR to make a message movie that neither panders down to the audience, nor outright insults its intelligence. In a nutshell, WALL-E is about how humanity gave up it's responsibilities to it's own creation. The movie itself tells the story of how humanity decided to take responsibility for itself, and the robot that led the way. Now, when it's put that way, it sounds like the kind of science fiction you'd see from Kubrick or Tartovsky, but WALL-E is certainly that kind of science fiction.

You've all seen the trailer a dozen times. For 700 years, Earth has been abandoned while robots attemt to clean up all of mankind's garbage. Now, only one robot remains, WALL-E (Waste Allocation Load Lifter - Earth class), and after years of collecting and storing garbage day in and day out, he's developed an endearing personality. Smartly, this is all that the trailers tell us. It was crucial for us to get acquainted with WALL-E early, since large portions of the film go by where there's no dialogue whatsoever. For me, this was no issue, but then I'm not the average moviegoer. But the bigger picture is so much more nuanced and layered than even Ratatouille. And while we're talking about other movies, I can't help but notice some striking similarities to Mike Judge's Idiocracy (particularly the massive, city-sized department store).

So yes, WALL-E is similar to 1970s social sci-fi like Silent Running and Soylent Green. But it's also, perhaps more importantly, a very charming love story between WALL-E and a robot named EVE. Even though a good portion of their story plays out almost entirely through actions, I'm amazed how well they were able to convey such a wide range of emotions using nothing but eye motions and each others names. It's enough to make question whether the script for Titanic was so bad in the first place.

WALL-E is yet another film from PIXAR that kids will find adorable, while their parents, or any discerning adult, will take away something a little deeper.  That's what PIXAR's been doing since Toy Story, and WALL-E does nothing to break that tradition.  It's PIXAR's best movie since The Incredibles, and only time will tell whether it's their best period.  While we're talking hyperbole, I also believe this to be one of the best science fiction films of the decade, if not quarter century.  I'm eager to see WALL-E again, if only to catch everything I'm certain I missed last time.  You owe it to yourself, your family, and the box office to see WALL-E in theaters.
5 stars (*****) out of five.
Posted by JP_Wade at 10:41 PM

Awesome review! Completely accurate. I know I will be going back to see Wall-E again soon.