It's been 25 years since Return of the Jedi hit theaters Memorial Day weekend of 1983. This isn't much of a milestone for anyone except the hardcore Star Wars fans, but it's certainly an interesting anniversary. It means the original Star Wars trilogy in full has been around for a quarter of a century. Now, I wasn't yet a twinkle in my parents eyes when Jedi came out, but of all the original Star Wars films, it's had the greatest impact on me as a fan of the series, and as a film viewer in general.

The way my dad tells it, as soon as I was able to start watching anything, he tried to get me to watch Star Wars with him. The first issue was I was a fidgety little creature and refused to sit still long enough to watch the whole thing. The second issue was that the only Star Wars movie we had on VHS was Return of the Jedi. I'd say once I was six or seven years old, I finally got curious and asked to watch it. Now, Star Wars really didn't click for me until I was probably ten or eleven, right around the time the Special Editions reached theaters. By that time, I'd finally seen the first two films, but the damage was already done. I'd watched Jedi first, so I knew Darth Vader was Luke's father, I knew Luke and Leia were siblings, and I knew everything turned out okay. Clearly, none of this dissuaded me from wanting to see A New Hope and Empire Strikes Back. And I did, and I loved them just as much as I loved Return of the Jedi. 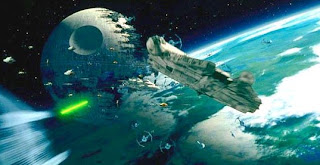 Today, my favorite film in the series is Empire Strikes Back, but I still hold a special place in my heart for Jedi. For all intents and purposes, Jedi is sort of the black sheep of the series. The first act is an oddly staged con to rescue Han Solo from Jabba the Hutt. To this day, I'm not entirely keen on it. The battle over the Sarlacc Pit makes the sequence worth it, but to get there you have to slog through some pretty grim stuff. Then, of course, there's Luke's final visit with Yoda, which has always captivated me for some reason. I think it's because seeing the old master on his deathbed first makes the spry, goofy Yoda in Empire kind of jarring to watch.

The second half of the film more than makes up for the oddly paced first half. The three-tiered Battle of Endor is the ultimate climax to the series. There's a good reason why they didn't change a single bit of it for the Special Edition. The model work at play here is the best I've ever seen, and with the advent of CGI I doubt I'll see anything top it. The land battle between Han, Luke, Leia, Chewie, rebel troops, Ewoks, and stormtroopers, while a tad on the silly side, is still exciting. Then, of course, there's the duel between Luke and Vader, with the Emperor watching from the sidelines. The duel in Empire is the more captivating of the two, but there's a real drive and urgency to this duel that's always sent a chill down my spine.

(Author's note: In the middle of typing this, I suddenly found Return of the Jedi on TV. Clearly, I'm not the only one who knows whose birthday it is.)

Additionally, Ian McDiarmid's Emperor has always kind of haunted me. Sitting on his throne, bored disdain for everyone, including Darth Vader, oozed from his jet black robes. I remember him freaking me out most of anything from the Star Wars movies, and that was almost certainly by design.

I could go on all day about what I love about Return of the Jedi. It's one of the four or five movies that molded me into the film lover I am today. But instead, I'm just going to wish Jedi a happy 25th, and I hope to enjoy it for many decades to come.

Now, if you'll excuse me, I've got a movie to finish. 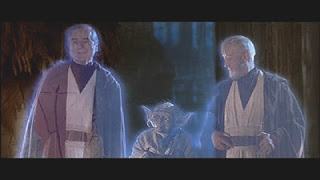