Every once in a while, a movie will come along that will remind me why I love movies in the first place. Everyone has that movie that permeated their imagination so thoroughly that it changes you. A movie so in love with the art of moviemaking that it inspires you to go home, pick up a camera, and start making movies in your own backyard. For these guys, it was Raiders of the Lost Ark. For me, that movie was Clerks.
For Will Proudfoot (Bill Milner), that movie was First Blood. Will's childhood is one of bible study and prayer meetings; one in which any and all pop culture is strictly forbidden. That is, until he meets a loner named Lee Carter (Will Poulter). During his first visit to Carter's home, Will watches a pirated copy of First Blood (which Lee videotaped himself at the local theater). Carter enlists Will to be the stuntman in his amateur film, which Will soon turns into his chance to portray the son of John Rambo.
It's easy to say that writer/director Garth Jennings' film plays deeply in the power of imagination. And it does. However, what's more interesting is that the film not only depicts Will's enormous wellspring of imagination, but follows through and shows us the fruits of his and Lee's labor. After all, half the fun of making a movie is showing it to others, right? All the stress of working with others, the ingenuity of having to do everything yourself, Son of Rambow is an ode to the plight of amateur filmmakers, young and old. 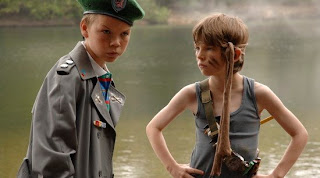 Underneath the plot of two cineastes making a movie is an even more poignant story of a friendship between two kids who couldn't possibly be more different, and maybe shouldn't be friends in the first place. The pairing itself is a typical Odd Couple team, but the two young stars handle the script like pros. They never come across as annoying or grating, but more like the playfully ambitious duo that they're portraying. For their part, the supporting cast do a fine job, including Jessica Stevenson (Spaced) as Will's overprotective mother.
If the film has any faults at all, it's that it doesn't go for broke as often as I might have liked. I'd have liked another scene or two for each of the film's subplots to develop a little fuller. But then, that would have likely betrayed the simplicity that Son of Rambow seems to champion. The film does begin to lose its way near the end, but then so do Will and his newfound film crew. Once things come to a head during the 'getaway scene', the film gets itself back on track and proves to be all the more touching for it.

Jennings' script brings Will and Lee's friendship full circle, and plays on your emotions in some unexpected ways. The sheer joy of storytelling at play in Son of Rambow is something that more films need to adopt, and quickly. Jennings' film is a lot of things, but tedious is not one of them. Simply put, the ending sold me on the film perhaps even more than the whole of the film did. I don't know if that's a good or bad thing, but I absolutely appreciate the journey, and look forward to taking it again on DVD. As far as movies about kids being kids go, Son of Rambow is something special.
4 stars (****) out of 5.
Posted by JP_Wade at 8:32 PM