I've made nearly a dozen false starts in trying to write a decent review for Speed Racer, and I simply can't do it. So I'll put it in simple terms: Speed Racer is the single most exhilarating film experience I've had all year. It does things with narrative film language that I can honestly say I've never seen before, and the Wachowskis aren't breaking the rules. They're simply showing us new ways to think about those rules, and the way Speed Racer tells its story never betrays the way we understand it. Intricate flashback sequences only work to advance every facet of the plot instead of bring things to a halt just to tell us things we may not need to know. As the story unfolds, things remain clear and easy to follow, which is essential, because at its heart Speed Racer is absolutely a kids movie.

The move and its basic plot are both very simple, things that kids will easily understand. Speed Racer (Emile Hirsch) and his family have racing in their blood, so much so that their oldest son, Rex, left the family behind to make racing a more respectable sport. Boiled down to the basics, the movie is about Speed trying to be the best driver out there. But built on top of it is a story about underhanded business deals, mob connections, and clashing ideas regarding the nature of competition. Some of this might go over kids' heads, but for the rest of us it makes Speed Racer's plot all the more twisted and fascinating.
And that's one of the things that the entire movie does so well. The Wachowskis do a remarkable job of stylizing the reality of this world, while at the same time making it seem strangely believable. The aesthetic is like nothing you've ever seen, yet the characters' motives and reasoning are tied to some very real-world concepts. The fact that businessman Royalton (Roger Allam) tries to intimidate Speed with stories of the business behind the racing world is the kind of thing that I'm sure MBAs pull their hair out over. It's too complicated for some kids to wrap their heads around (or even care much about), but for the older viewers, it makes the meat of the film that much juicier.

It's been almost a week since I saw the movie, and I'm still coming down from the visual sugar rush. The colors are vibrant, the editing style is frenetic, Michael Giacchino's
score swirls and pops with memorable themes, and yet it's all surprisingly easy to follow. I am astonished at how fluid the visual overload of the film was. Super-extreme close-ups, camera tricks that could only be achieved with CG, and stylistic pastiche of computer-generated and hand-drawn backgrounds, and gloriously imaginative set designs all make Speed Racer the kind of film with which scholars like David Bordwell would have a field day.
From the exhilarating races that make up the crux of the film to the goofy antics of Spritle and Chim-Chim, the film never struck a sour note with me, nor was the length much of an issue. There were slow patches, but those were quickly remedied with action sequences that never looked like the ones that preceded it. For my money, there's simply nothing like Speed Racer, and that's a great, great thing. 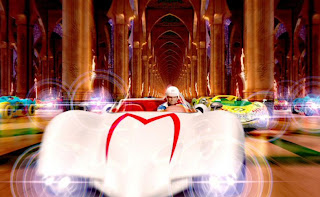 Now, a quick perusal of Rotten Tomatoes or MetaCritic will show you that most critics are panning the film for being too much eye-candy for not enough payoff. My guess is that none of these critics are prepared to admit that Speed Racer represents a new way of watching and making movis. The visual overload is all part of the experience, and the hyper-kinetic storytelling is very much a 'love it or hate it' style. I've never been a big fan of the cartoon series, mostly because I never really saw it much as a kid. I know enough to know what to expect out of the film, and as such Speed Racer exceeded expectation. I can't wait to see Speed Racer again, and in a nutshell, that's all that needs to be said.
****1/2 (4.5 stars out of five)
Posted by JP_Wade at 10:52 PM