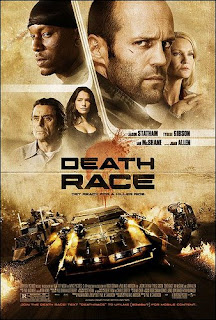 For everyone who thought Speed Racer was too childish and silly, or who thought The Shawshank Redemption could've used some explosions, well, Death Race is probably the movie they've been desperately waiting for. The remake of Paul Bartel's 1975 Death Race 2000 proves that writer/director Paul W.S. Anderson (Mortal Kombat, Alien vs Predator) is the king of Z-grade action flicks, and that Jason Statham is Hollywood's last true action hero. Whereas the original was an ironic, silly kind of satire wrapped around fancy driving and gruesome deaths, this remake ups the adrenaline and the pyrotechnics, but does little to amplify the satire.

It's the year 2012 and America's economy is in the toilet. The opening title cards explain that the world's latest spectator sport, Death Race pits life-sentence prisoners against each other in a gruesome race for a shot at freedom. Win five races and you're free to go. The reigning champ, a driver dubbed Frankenstein (briefly voiced by David Carradine, who played the character in the 1975 version) is one race away from freedom, but dies before he can win his fifth race. Enter the wrongfully convicted Jensen Ames (Statham), whose past as a stock car driver wins him the chance to become Frankenstein and win his own freedom. 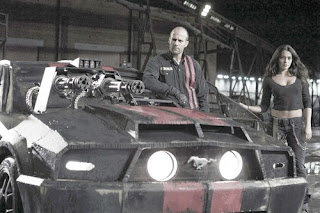 There's more plot concerning the prison warden (Joan Allen) and her "do anything for ratings" attitude, which tries to bring in some kind of satire, but really just comes and goes without a second thought. Then there are the other racers, including Machine Gun Joe (Tyrese Gibson in the Sylvester Stallone role), who's won three races and is out to squash Frankenstein like a bug. Also, we're introduced to Statham's pit crew, led by Ian McShane as a character aptly named "Coach". This introduction scene lasts all of 30 seconds. Anderson doesn't have time to waste on things like character development.

Of course, the story and plot turns aren't what people are coming to see. They're here to see three things: lethal races, hot women, and lots of explosions. And Paul Anderson indulges us in every single one of those things. From the powerups that feel ripped right from Twisted Metal or Mario Kart (seriously) to some truly gruesome kills. Everything action fans want is here. However, that also includes frenetic editing and shaky camera setups. Thankfully, the action is easy to follow. It also helps that the majority of the stunts are practical; CGI is used, but only sparingly. 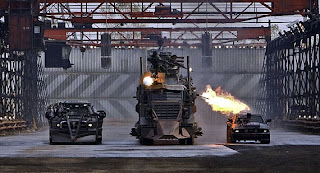 My personal beef with Death Race is that as often as it tries to convince us of its grim, dark, halfway-futuristic dystopia, and for all of it's gratuitous violence, the movie ultimately plays things too safe. They remove the "Running over pedestrians for points" notion by setting the race on an offshore prison, keeping the public safe from all the gunfire and explosions of the race. What made the original Death Race interesting and fun to watch was that you never know who might get run over next. Sure, the satire wasn't sharp or even very timely (it is now, though), but at least there was a sense of danger. At any moment, a car could careen around a corner and take out an innocent bystander. All the violence in Anderson's film never comes as any kind of shock. These are killers racing and killing each other because that's all they can do. And in that, the film becomes predictable. Thankfully, it's fun enough just to watch the carnage play out.

This marks the third movie in which Jason Statham drives a car in order to save the day (soon to be four; Transporter 3 drops later this year). He's still playing the stoic badass, but that's what we've come to expect. The movie's main fault is that the plot holes, continuity errors, and illogical bits are a dime a dozen. Also, we get to see Joan Allen deliver possibly the worst line of dialogue this year. It's almost a game unto itself to spot them all. The story plays out like you'd expect, but if you're willing to let the adrenaline rush sweep you up, Death Race is a ridiculous and entertaining spin around the track.