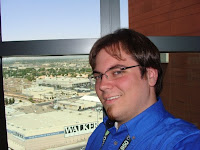 I spent all of last week at the Las Vegas Furniture Market. Not a whole lot to report there except for the free Rod Stewart concert that the market threw the first night. It was a good show; Stewart played most of his big hits (and a few hits that weren't his) for a solid hour and a half. For a performer in his 60s, Rod Stewart's definitely still got it, not that I can claim to be an authority on the matter. The above photo is me at the top of the World Market Center looking snazzy and kinda like a jerk.

Aside from that, my laptop computer decided to die out on me back in July, and I've been living off other people's computers ever since. That is, until today, when my new laptop arrived at the doorstep. It's pretty fancy stuff.

Finally, I'll be moving to Raleigh this coming weekend to begin my stint in graduate school. This really shouldn't keep me from posting here, and I still fully intend on reviewing a whole bunch of movies this month (and beyond). I'm even working on a couple of other posts that I think are particularly fascinating. When it's ready, I'll post it to see what you all think.

Until then, be on the look out for two reviews this week. "Pineapple Express" and "The Midnight Meat Train". Peace out, gang!
Posted by JP_Wade at 8:01 PM