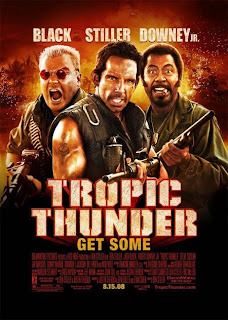 After a summer of comedies that were awful at worst and passable at best, I was surprised to find myself actually looking forward to a Ben Stiller movie. Don't get me wrong, the guy's got talent, but one doesn't typically turn to Stiller to get them out of a comedic funk (or, at least, I don't). However, what a lot of people forget is that Ben Stiller is also a gifted director, who's done a good job of directing romantic comedies (Reality Bites), black humor (The Cable Guy), and simple goofball stories (Zoolander). So it's no surprise that Tropic Thunder is just as good as his past work, if not considerably better.

The movie opens on the set of Tropic Thunder, a war movie based on a novel by war hero Four Leaf Tayback (Nick Nolte). The two stars, Tugg Speedman (Ben Stiller) and Kirk Lazarus (Robert Downey, Jr.) are having trouble making the scene work and rookie director Damien Cockburn (Steve Coogan) accidentally sets off a $4 million explosion between takes. Needless to say, things aren't going well. So in order to salvage the movie, Tayback convinces Cockburn to take his actors into the Vietnam jungle and shoot the movie guerilla-style. Interestingly, this is close to how George Lucas originally intended to shoot Apocalypse Now.

Almost as soon as the actors are dropped into the jungle, things start going wrong and people start getting captured. Revealing any more plot would ruin some of the fun, but rest assured that the actors, including comedian Jeff Portnoy (Jack Black), rap star Alpa Chin0 (Brandon Jackson) and rookie actor Kevin Sandusky (Jay Baruchel) eventually take it upon themselves to save the day.

Were this the only thing going on in Tropic Thunder, it might have still been a decent comedy, but when coupled with a subplot involving Speedman's agent (Matthew McConaughey) and movie producer Len Grossman (Tom Cruise), the movie becomes a sharp satire on the frivolity of the movie industry. Cruise's character sells this hook, line, and sinker as he barks orders, screams into phones, and walks around completely convinced of his own ego. He gets his share of laughs, but never crosses over into 'hilarious' territory.

You could easily compare this movie to Galaxy Quest. The setups are all similar and the metajokes are in just about the right place, though Tropic Thunder goes a bit further in skewering it's targets. A lot of the film's success rides on the backs of it's peanut gallery: McConaughey, Cruise, and Danny McBride, who plays the film crew's explosives expert. Last week I said I was getting tired of McBride doing the same old thing, but here he really gets the chance to cut loose and be as ridiculous as he wants. 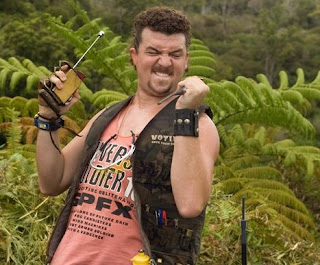 Just like Pineapple Express last week, the action sequences of Tropic Thunder are equally as impressive as the comedy. A lot of this stems from the fact that Ben Stiller is, in fact, a competent director. None of the effects are staged poorly, and are silly only when in service of the comedy. It's enough to make one wonder what Stiller could do with a serious action film.

A lot has been said lately about the movie's discussion of the mentally retarded. From my point of view, it's much ado about nothing. Yes, at one point Tugg Speedman plays a character who is handicapped, and he and Lazarus discuss the politics behind this (Lazarus reasons that Dustin Hoffman and Tom Hanks won Oscars based on the fact that their characters were merely handicapped and not, as he puts it 'full retard'.) I'm guessing this is what the uproar is all about.

But why? Because two characters in a movie discuss the portrayal of the mentally handicapped in other movies? Sure, they talk about it nonchalantly, and not as clinically as some (including myself right now) might, but that's because those are the characters. When we see the scene from the film they're discussing, "Simple Jack", we're not laughing at Jack because he's 'simple', we're laughing at Tugg Speedman because he's clearly trying way too hard to parody Lennie Small. 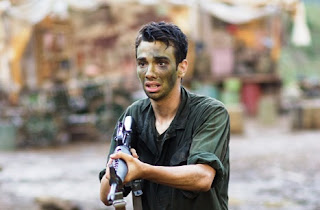 From the politics of whites and blacks in the movie business to those of actors portraying mentally handicapped characters, Tropic Thunder is just as much a satire of the Hollywood system as it is of the war movies it winkingly rips off along the way. None in the cast ever really drops the ball, and the comedy clicks from start to finish. It's no The Player, or The Bad and the Beautiful, but Tropic Thunder is up there with Galaxy Quest and Bowfinger, and it's the comedy to beat in 2008.