So did anyone else catch the opening ceremonies of the Beijing Olympics? According to USAToday, one billion people watched the ceremonies, either on TV or actually in attendance. That's roughly fifteen percent of the world's population. That's insane! I don't have any sources to back this up, but I'm willing to bet that it was one of the most watched broadcasts in TV history.
Some people here in the States took issue with the fact that the broadcast was delayed for Prime Time, but I didn't mind. It might have been fun to get up early in the morning just to watch, but it was just easier to wait til 8PM the next day. I doubt anything was stopping NBC from running it live, then rebroadcasting it later in the evening; they just didn't. But what an amazing broadcast it was. Spectacular setpieces representing different eras of Chinese history, from the coordinated efforts of 2008 drummers playing ancient Chinese drums, to an even more impressive display of calligraphy through interpretive dance, culminating in a marvel of visual effects with massive LED screens. It was truly a sight to behold, and if I didn't know any better, I'd have sworn I was watching a Yimou Zhang film. 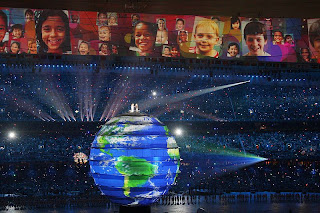 But wait. It turns out Yimou Zhang was on hand as the director of that night's ceremonies. As that New York Times article says, for an artist whose films have been largely critical of the Chinese system (and then rejected because of the fact), it's good to see the country at least recognize his talent.
Then of course, came the Parade of Nations, which is always a fun thing to watch, provided you have a few hours to kill. And if you listened carefully to Bob Costas' rambling commentary, you could hear snippets like, "And now here comes the Central African Republic, which, as you may know, is a Republic in Central Africa." But just before the world collectively said "Bob Costas, you're an idiot," he added, "That was a joke I'd made 1992 Olympics, and some people thought I was serious." Still though, Bob. If it wasn't funny then, it probably won't be fully 16 years later. 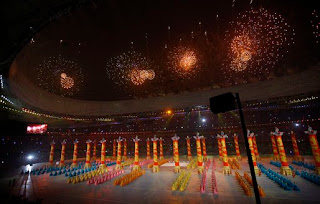 Finally, there was the torch lighting. I've seen replays and clipshows all over the internet and TV of past torch lightings, and this one seemed pretty standard in comparison to the show that had just come before it. But at any rate, it was great to watch as the torch came to the final runner, who took off on wires and 'ran' all the way around the top of the stadium to light the torch at the end. Breathtaking maybe isn't the right word. But it sure was something.
For better or for worse, these opening ceremonies were absolute entertainment, and I loved every second of it. Now, let's hope the events and closing ceremonies are just as enjoyable.
Oh, also: If you ask me, the Beijing National Stadium (aka the Bird's Nest) looks an awful lot like a giant bedpan wrapped in rubber bands. 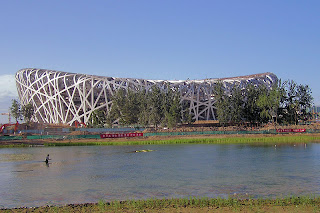