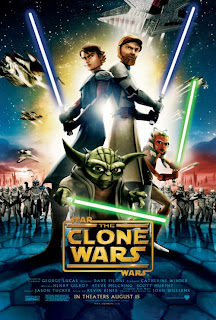 Star Wars: The Clone Wars is different things to different people. For the uninitiated, it might be a fun gateway to the larger Star Wars universe that's been unraveling for the past thirty one years. For fans of the prequel trilogy, it's a tantalizing look at what went on between episodes two and three. For the diehard fans who have loved Star Wars from the beginning, The Clone Wars can best be described as the master's thesis on everything wrong with the prequel trilogy.

This is a difficult review to write for a number of reasons. For starters, I did enjoy large portions of the prequel trilogy, but I can also recognize that it left a whole lot to be desired. I can't outright dismiss this film as being another notch in a trilogy best left on the written page, but I can say that there are many things wrong here that absolutely have to be addressed. Put simply, The Clone Wars is a mess of a film that does nothing to mend the damage caused by Attack of the Clones.

The Clone War is in full swing, as we're told by a zippy intro narration that replaces the series' staple title crawl in favor of quick action and brief recap (for the kids who were still in diapers back when Episodes I and II came out). The Separatist Army's latest scheme, cooked up by Count Dooku (Christopher Lee, one of the few returning cast members), involves kidnapping Jabba the Hutt's son, Rotta, and blaming it on the Jedi, thus causing Jabba to deny the Republic the use of his airspace.

Enter Anakin Skywalker (Matt Lanter) and his new padawan, Ahsoka Tano (Ashley Eckstein), who are tasked with rescuing the baby Hutt. Here is where the story spends most of its time. The relationship that builds between Anakin and Ahsoka never turns romantic, but the teacher/student dynamic works surprisingly well here, and would have been far more compelling had it been a part of the live action trilogy.

In fact, that's probably my biggest complaint with The Clone Wars: Everything feels like one giant missed opportunity after another. The story in this film is fine, and would have been a much better fit for the second film in the trilogy than the story that wound up becoming Attack of the Clones. I would have loved to have seen this pulled off by George Lucas himself with his principal cast and special effects team at the controls. After all, this is the war that fans have been dying to see onscreen ever since Sir Alec Guinness name-dropped it back thirty one years ago. So why has it been relegated to the end of the second film, the beginning of the third film, and a questionably canonical pair of cartoons set during the interim? Not the best decision-making there, George.

Many people are griping over all the kid-level humor in this film. You know what, at this point, I've had to sit through Jar Jar Binks in three films, not to mention C-3PO's newfound obsession with puns. I've all but given up on Star Wars for cutting edge humor. If George Lucas wants us to believe that Star Wars is strictly for children, he's done an excellent job just in his sense of humor. Of course, Lucas didn't write a word of this film, but handed it off to a team of writers and directors. None of that matters, because this whole thing still feels like George Lucas. It sounds like George Lucas, it moves like George Lucas, it IS George Lucas. Many, if not all, of the jokes in The Clone Wars are tacky, bordering on cringe-inducing. It's like they took the worst jokes from Return of the Jedi and cranked them to eleven.

Then there's the animation to talk about. Lucasfilm claims they wanted to make this film look like Star Wars but with a smaller budget. They succeeded, and with all the problems that that implies. The character animation frequently looks jerky, the backgrounds and matte paintings look like quickly thrown-together temp pieces for much more intricate backdrops. Just about the only things the animators got right here were the character and ship designs. At least they look like who they're supposed to look like.

The same cannot be said for the voice cast. Of the prequel trilogy cast, three actors returned to lend their voices: Samuel L. Jackson, Christopher Lee, and Anthony Daniels, who is now officially the only cast member to appear in all seven Star Wars films. Daniels and Lee sound fine, but they're not really given much to chew on. Jackson, though, sounds like he doesn't even want to be here. Mace Windu definitely sounds like Sam Jackson, but he sounds not a thing like Mace Windu. Matt Lanter does a passable impression of Hayden Christensen, which isn't much of a compliment. He sounds about as lost as Christensen did.

The only breath of fresh air here, oddly enough, is Ashley Eckstein as Ahsoka Tano. While the things she's given to say are eye-rollingly awful, she at least gets the character, and I'm willing to bet many a young female viewer will connect with Ahsoka. My other big problem with her character is more fundamental. The fact that she exists now at all is sort of a boneheaded play on Lucas' part.

Had this been released between 2002 and 2005, or had it been Episode II from the beginning, there would at least have been some dramatic tension in where things would play out from here. But now that we've seen the way the saga ends in Episode III, it's clear that at some point down the road, Ahsoka Tano will meet with some grim fate, as will all the other characters that appear here but not Episode III. This fact has to be clear to everyone at this point. That's just the way narrative works. If The Clone Wars had featured all new characters dealing with the war far from the prying eyes of Anakin Skywalker, et al, there might have been some good material to wring out of the prequel trilogy after all. As it is, however, we know what's going to happen already, so why bother?

In the end, The Clone Wars represents a big, fat "Who cares?" on the already tarnished record off the prequel trilogy. It's a blatant money grab that only offers thrills to those who know either little to nothing of Star Wars canon, or who are too young to care. Too many answers are raised to questions which nobody asked, too many jokes miss their mark to all but the most easily amused, and too many hard earned dollars were paid to a franchise that's clearly now just spinning its wheels.

I would love to see more Star Wars somewhere down the line. But not like this. Without John Williams and the title crawl, this doesn't even feel like Star Wars. It feels like Wacky Adventures in a Galaxy Far, Far Away. That's not Star Wars. Not by a long shot.