Here's the sixth part of my seven-part series looking back at the films of PIXAR studios. Enjoy...

It's been two years since I first saw Cars in theaters. That was also the only time I saw the movie. Now, just because I think Cars is PIXAR's worst movie doesn't necessarily mean I think it's a bad movie. But, in my opinion, it's by far their weakest effort.

Mostly, my problem with the movie all boils down to the logic of a world populated by nothing but cars. Where did the cars come from? Who builds the cars? If there are male and female cars, do they make baby cars? (Which brings up another issue: did they need to sexualize the female car?) More importantly: WHERE ARE ALL THE PEOPLE?! I could go on and on, but the point is that for a studio who prides itself on making the unbelievable seem believable, especially with regard to their characters, Cars seriously drops the ball. 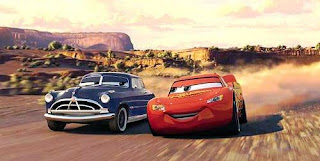 On the other hand, one of the few things that Cars does very, very right is it's voice cast. Owen Wilson, Paul Newman, Tony Shaloub, Larry the Cable Guy, George Carlin, Bonnie Hunt, Michael Keaton, Cheech Marin, Richard Petty, and a whole bunch of other stock car drivers that NASCAR fans would be able to identify easier than I could. The point is that they really pulled out all the stops to get the best talent they possibly could. Typically, animated films will cast famous names more for the screen credit rather than their vocal talent. Here, everyone does a pretty great job, especially Paul Newman. It's a real treat to hear Newman still kicking around, even if it's from within a soundproof booth.

I think it's interesting that what John Lasseter essentially did was to trick us all into watching a sports movie. Deep down, Cars owes a lot to movies like Days of Thunder, Breaking Away, etc. The movie's pretty deeply rooted in not only sports movie tropes, but American iconography as well. Lasseter's said repeatedly that Cars is meant to be a love letter to the American highway. And in that regard, the movie works. Everything else, though, feels like stock PIXAR going through the motions. More on my theory behind that next time. 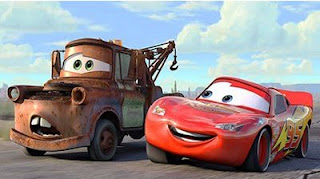 Having said all that: I'm completely at a loss as to why a sequel is scheduled for release in 2012. From the entire PIXAR catalog, was the Cars universe really the one with the most sequel potential? I'm thinking not. In the years to come, we're going to see some original movies that sound, for lack of a better word, fascinating (Up, newt, and The Bear and the Bow). To then revisit the franchise that most people agree was the least successful just doesn't seem like a smart choice. But hey, I'm not one to argue with PIXAR. They've proven me wrong more often than not, so I'll give Cars 2 a chance.

Oh, and I want to leave you with one last thought: Don't the cars in Cars remind you of those terrifying cars from those old Chevron ads? 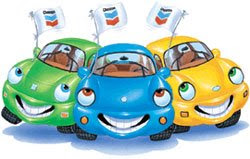 Come back tomorrow for the final entry in my PIXAR retrospective...
Posted by JP_Wade at 9:32 PM

Well, everything I had to say about Toy Story pretty much applied for Toy Story 2 as well. Except for the whole grandma story.