It's T-minus one week until PIXAR drops their latest film, WALL-E, on an eager movie-going public. I, for one, can't wait. So I thought I'd take a look back at the PIXAR catalog, one film at a time. Today's entry is a post I wrote about Toy Story on my MySpace blog about a month ago. Hope you enjoy...

One of the most vivid movie theater memories from my childhood is Toy Story. It opened right around Thanksgiving 1995, I was 9, my brother was 7. If memory serves me, I ended up seeing Toy Story three times in theaters. Twice with my parents, because I'm positive I dragged them back out to see it a second time. But many months later (meaning probably sometime the next spring), my brother and I spent a weekend at my grandparents house. That weekend, my grandma wanted to take us to a movie. The three of us looked through the movie times and she had us pick what to go see. And at the second run theater a few blocks over (back then, Greensboro had a pretty decent second run theater), Toy Story was still playing. "THAT!" 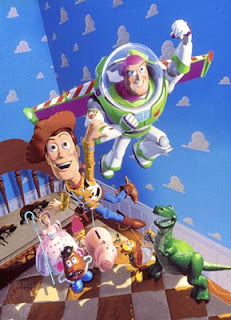 My grandma didn't know that my brother and I had already seen it twice, nor would she probably have cared. If we'd seen it 15 times, she'd still have taken us. So we went. I remember we arrived a couple minutes late, the movie had already started. I also remember feeling a little bad that she didn't get to see the beginning, but I got over it.

To this day, my grandma talks about how much fun it was for her to take my brother and I to see Toy Story. I honestly don't know if she really remembers the movie that well (or even understood it in the first place), or if she just remembers taking her grandkids to see some movie. But for some reason, I remember going to see it this third time best of all. I have no recollection of seeing it the first two times, but I'm positive that they did happen. Whatever the case, my memory of Toy Story is pretty vivid. Like most kids in 1995, I was nuts about the movie. I mean, what's not to love?

Now that I actually think back on it, the single weirdest thing that the movie did to me was it made me want all the toys featured in it for some reason. Somewhere at home, I've got a Cowboy Woody, Buzz Lightyear, Slinky Dog, and a whole bunch of other characters (including a Mr. Potato Head, but then who didn't?). And now I've graduated from collge, and they're all probably sitting in a box in the attic. Which, in context of Toy Story 2 (and what I hear of part 3) is really kinda depressing. Point being, Pixar made up all these toys to populate the film, and then had them manufactured to populate kids' bedrooms / play areas. That's pretty screwed up, don't ya think? 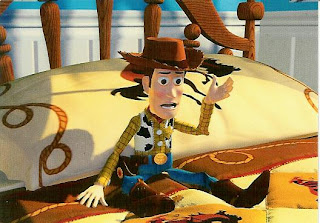 It's 13 years later, and the movie is every bit as fantastic as it was when I saw it for the third time with my grandma. I'll be in my mid-20's by the time Toy Story 3 comes out, and I'll be first in line to see it. Now, I'm not entirely sure why the movie connected with me the way it did, but then that's not something that I need to understand. All I need to know is that it did, and I've loved every minute of it since 1995.

You might think I'm pulling out all the same analogies and descriptors for all the movies I used to love as a kid, and that's alright, because to a certain extent I am. My love for a lot of these movies is, for the most part, equal. While I'm a bigger fan of Star Wars than I am of Toy Story, it doesn't mean I like the latter any less. They both hold equal, yet very specific places in my heart. And if you gather anything from what I've written here, I hope it's just that I have a very particular memory of Toy Story as a kid, and I think that made all the difference.

I'd like this to be an ongoing series of entries. Not reviews of why I love some of my favorite films, but rather my recollections of seeing them in theaters and their impact on my own childhood/life, a lot like my review of TMNT last year.

Come back tomorrow for my thoughts on A Bug's Life.
Posted by JP_Wade at 12:09 PM