I don’t have too much to say about Monsters, Inc. I did see it in theaters with my family, and I remember it being one of the first movies that I absolutely had to have on DVD. Monsters, Inc., along with A Bug’s Life and Cars, is most often put into the category of ‘standard PIXAR fare’, which is a shame, because the film is mostly very good. Like I’ve said before, none of the PIXAR films are really bad, but some are easily not as successful as others. If I were to rank the films in terms of quality, Monsters, Inc. would probably land right in the middle of the list.

At the 2002 Academy Awards, Monsters, Inc. lost to Shrek in the first ever ‘Best Animated Feature’ category. While Shrek certainly deserved the award (though perhaps not over Monsters), time has not been kind to Shrek. Its wellspring of pop culture references, while certainly well-executed, is still subject to the same laws of aging that plague other parodies and satires. One has to wonder whether Shrek will still feel as fresh and smart in 20 years as it did seven years ago. My point is: time has been nothing but kind to Monsters, Inc. 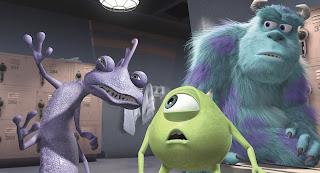 One of the things that impresses me about PIXAR films is their ability to create endearing characters out of things that typically turn off kids and parents. Bugs, rats, monsters, etc. I’ve heard a lot of stories of parents taking kids to see Monsters, Inc., and the kids being terrified because it was a movie about monsters. Of course, once they see the film, they love it. PIXAR shows extraordinary care in creating characters every bit as interesting as the stories that surround them, and Monsters, Inc. displays some of their more unique character designs. Mike Wazowski in particular is a lot of fun to watch, and has a lot of comedic potential that they mine for all he’s worth. It doesn’t hurt to have the likes of Billy Crystal and John Goodman voicing the characters.

Of all the PIXAR films, I’m more eager to see further adventures with Mike and Sully than any other PIXAR characters (ok, excepting The Incredibles). The closest we’ll probably ever get are the short cartoon “Mike’s New Car”, and the Monsters, Inc. Laugh Floor show at Walt Disney World. In the end, it represents one of PIXAR's most bizarre films wrapped around one of their sweeter stories. I don't care who you are, it takes a black heart not to think Monsters, Inc. is at least a little bit adorable. 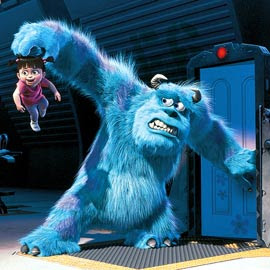 Come back tomorrow for a look back at one of PIXAR's most popular films: Finding Nemo...