Here's part four in my seven-part retrospective of PIXAR. Enjoy...
I remember seeing Finding Nemo in theaters and instantly falling in love with it. The story was very well constructed, the animation gorgeous (the water effects!), and it was very, very funny. I had some problems with the voice cast (Ellen Degeneres in particular), but for the most part, Finding Nemo represented another giant step forward for PIXAR. 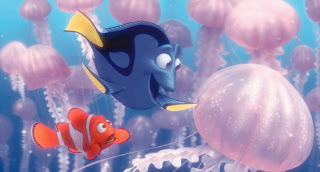 And it's popularity is obvious. $864 million worldwide gross, Academy Award for best animated film, ranked #10 on the American Film Institute's Top Ten Animated Films of all Time. For my money, it's easily one of the three or four best films of 2003.

Over the years since its release, my opinion of it has cooled. I still admire the film enormously, but it's a bit harder for me to just sit back and enjoy it. Maybe the problem is that the general public, kids specifically, absolutely love Finding Nemo. I haven't met a kid who couldn't quote some line from that movie. Which isn't really a problem, I'm not saying it's bad that everyone likes the movie. But when everyone likes a movie, it starts to get a little old. Suddenly kids everywhere see a flock of birds and start shouting, "MINE? MINE? MINE? MINE?" Every fish in every fishtank is suddenly automatically Nemo, regardless of whether or not it's actually a clownfish. 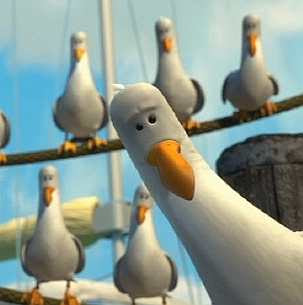 So I had to distance myself from the movie just so to keep everyone else from ruining it for me. Since it's theatrical run, I saw it maybe one or two more times. When you go to college at one of the top marine biology schools in the country, you hear a lot about Finding Nemo. And oh, did I ever... I don't think I saw the movie once in my entire four years at college. And if I had, everyone else might have ruined the whole movie for me. But about a month ago, Finding Nemo came on television. I drop right down into the sofa and start watching it. This time, I saw it for the somewhat serious story of parenthood that it actually was. The jokes were still there, but I was more invested in Marlin's journey than anything else.

And that's the sign of a great film. You can watch it once and enjoy it, laugh at it even. But years down the road, you'll see it again in a whole new light. That's Finding Nemo for me. It's PIXAR's most elegantly conceived film, and I look forward to seeing Andrew Stanton work this same kind of magic with WALL-E.
Posted by JP_Wade at 11:03 AM