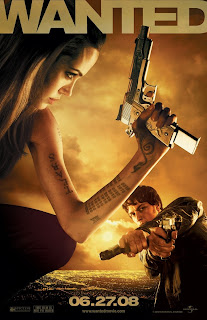 Timur Bekmambetov's English language debut is something of a schizophrenic monster. On the one hand, the movie is a showcase of some of the most kinetic action sequences seen on film in the past few years. On the other hand, the movie's plot is in turns predictable and sometimes nonexistent. If you like your action to stand in for narrative twists and turns, Wanted is probably the ride you're looking for.

The film opens with an amazingly executed shootout that sets up the style that you're gonna get for the next 110 minutes. Then, we're introduced to Wesley Gibson (James McAvoy), a geeky accountant who hates his life about as much as Edward Norton's character in Fight Club. He's quickly drawn into a secret organization of assassins, populated by the likes of Morgan Freeman, Angelina Jolie, and Konstantin Khabensky (star of the director's Russian Night Watch films). There, Wesley learns the ins and outs of his abilities as an assassin for The Fraternity, including the ability to curve a bullet's trajectory.

And that's where the movie begins to unravel. Once Wesley agrees to become an assassin, the film becomes a seemingly nonstop barrage of training montages. Granted, these montages are a lot of fun to watch, but it seems like Bekmambetov is aware that his script doesn't hold much water. There's not much plot in the middle sections of the film, or at least not much plot that we don't already know.

Morgan Freeman is one of the few actors alive who can spin crap lines into cinema gold. Half of his dialogue in this movie is testament to that. McAvoy does a good job as the everyman schlub, and it's fun watching him go from weakling to quasi-superhero in the space of two hours. Strangely, the weak link here is Angelina Jolie, who seems way too high profile for what she has to do here. 'Menacing stare' and 'entrancing stare' are her only real contributions, and I can't help but think that the role would have been just as good with a Rose McGowan or Summer Glau. 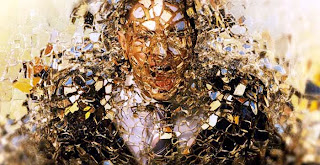 But anyway. If you're willing to indulge the movie its many wacky excesses, Wanted is at least a pretty fun time. Timur Bekmambetov definitely knows how to direct action, with some impressive stunts that I have to believe were done practically (and am thankful for). The last 20 minutes have some pretty great payoffs as well (All I'm going to say is that you'll never look at rats the same way again). If anything, Wanted is proof that Bekmambetov deserves more work in Hollywood, because the action that he weaves is some of the most fascinating action in movies today.