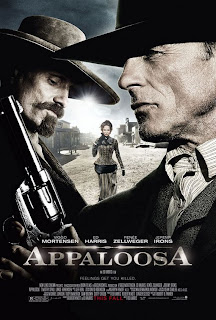 It's no surprise to say that the western genre isn't the box office titan it once was. Most people would agree that Blazing Saddles all but destroyed its credibility back in 1975 (despite the fact that Blazing Saddles is still one of the best comedies ever made). I'm not gonna give you a full history of the western genre, but suffice it to say that in the 21st century, there aren't all that many. So I don't pass up the chance to see one when it does come around. And thankfully, Ed Harris' Appaloosa does not disappoint.

It's 1882, and the town of Appaloosa hires gunman Virgil Cole (Ed Harris, who also co-writes and directs) and his deputy Everett Hitch (Viggo Mortensen) to take care of Randall Bragg (Jeremy Irons), a nasty rancher whose men have been terrorizing the town. Cole's law is strict, but it gets the job done. Bragg's eventual arrest and the arrival of a new widow (Renee Zellweger) in town cause Virgil and Everett to reassess their partnership, all the while quipping and fighting their way through every incident. 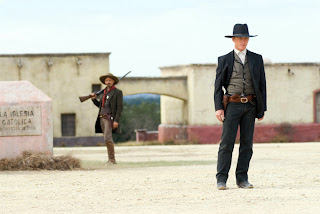 What first needs be said about Appaloosa is that it's about as faithful to the genre as you can possibly get without becoming entirely cliched. Ed Harris knows exactly what he's doing with this material, and stays true to the spirit of the genre. That's not to say that the film goes through the paces laconically. In fact, one of the more surprising aspects of Appaloosa is just how funny it is. There are dozens of great little character moments between Virgil and Everett that go a long way in telling us just how well these two know each other, and many of them are hilarious little lines or knowing glances.

Of course, what would a good western be without a simple theme to explore? The connections between Virgil, Everett and Allie (Zellweger) are dissected with fascinating precision, almost to the point where you know what each character is going to do even before the others. The film takes its time setting up all its pieces, and it's slow, deliberate pace will either work for you or drive you mad. There are a few well-executed gunfights, as there should be, and they're spaced out such that they keep things going just as the film starts to lag. 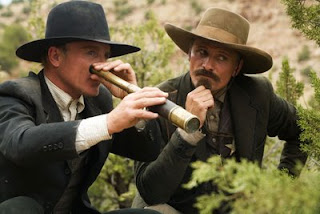 My one complaint is that the film itself feels like two separate stories. When Virgil and Everett face off against Bragg and gunman Ring Shelton (Lance Henriksen) about 2/3rds of the way through, it feels like the big final shootout. But hold on, because the film still has a ways to go before wrapping itself up. It works in keeping with the rest of the film, but the payoff feels uneven, if that makes any sense. The final act of the film almost feels like its own story. It works well in context of the larger story, but just feels like an epilogue that runs on longer than it ought.

Ed Harris directs the film well, with a fitting visual style that makes the whole thing feel like a forgotten Clint Eastwood yarn. Harris plays Virgil like a stoic hardass who wouldn't know a good time if it bit him on the ass. Everett knows this, and Mortensen does a good job of playing him as a man who's always picking up the slack, either professionally, intellectually, or otherwise. I wouldn't say Renee Zellweger is miscast, nor is she really bad here. She just is. She feels more like a plot device rather than a real, well-rounded individual. The same goes for Jeremy Irons. He snarls and shoots as the script demands, but doesn't quite make him a villain worth hating. 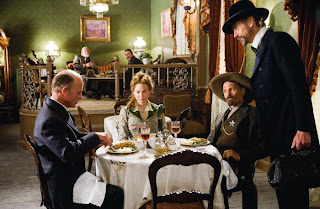 Appaloosa is not the definitive western for the 2000's, but it does succeed where I felt last year's 3:10 to Yuma failed. That wasn't necessarily a bad film, but compared with Appaloosa, that film was all about action, whereas this one is most definitely a character study. It's the kind of western that makes you want to see more westerns, if not a sequel with these characters. I, personally, would welcome another outing with Virgil and Everett. But only time will tell if the public agrees.