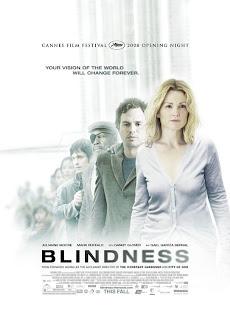 (Apologies for missing yesterday. One day this month, I'll be watching and posting two. Promise.)

So, what exactly IS Blindness? Should it be classified as a horror film? Well, it does show us a sort of post-apocalyptic world where an epidemic has destroyed society. Should it be classified as a science fiction film? Well, that epidemic IS blindness. I'd call Blindness more Children of Men than 28 Days Later, though you can certainly see influences of both in the film. While it's perhaps not as effective as either of those films, it's every bit as compelling, and a good deal more disturbing and stylish in its approach.

Blindness presents a scenario in which a sort of reverse blindness (meaning victims see all white rather than all black). The infected include an optometrist (Mark Ruffalo), his wife (Julianne Moore), a prostitute (Alice Braga), and an old man with an eyepatch (Danny Glover, who is literally credited as "Man with the Black Eye Patch"). The initial infected are quarantined in what can best be described as a deserted prison. There are facilities, food, everything they need. Until more infected arrive. And more. And still more, until they're filled to capacity, and all notion of society has been stripped away by a man who's proclaimed himself the king of Ward #3 (Gael Garcia Bernal). He takes control of the food, but our main characters' ace in the hole is the fact that Julianne Moore is not, in fact, blind. 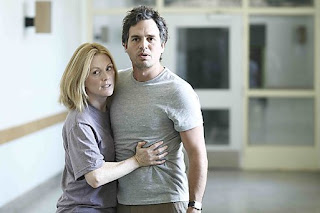 What follows is a very tense sociological study of not only quarantine dynamics, but also how a large group of blind people might behave when sequestered in such conditions. Of course, the film very carefully tiptoes around the notion of those who've lived with blindness since birth, those who are already attuned to having no sight. Those in the blind community who claim this is a poor representation of blind people have no reason to be upset. Blind people are not vicious pack animals, but it is reasonable to assume that large populations who suddenly lose their sight might react this way. The film takes a page or two from the George A. Romero playbook near the end, almost casting the blind as zombie scavengers. It's not a statement on blindness, but rather how society ceases to function in the wake of an epidemic such as this.

Perhaps the best thing about Blindness is the cinematography. The film has a washed-out, constantly reflective aesthetic. There are a lot of out-of-focus shots, scenes shot from off a mirror or the reflection of a particularly shiny floor. Perspective is constantly being toyed with, and it goes a long way in not only properly disorienting the viewer, but also reorienting the viewer once the film settles into it's methodical, grim groove. It might be easy to pigeonhole it as simply a gimmick, but at least the film is never a bore to watch. Some might see it as distracting, but I found it really added to the experience. 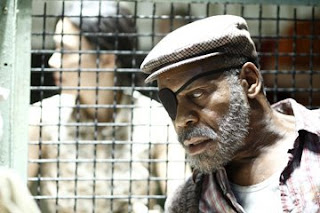 Ancillary to this is the notion of a movie about losing the very thing that allows you to watch movies. There are a number of shots that take place completely in the dark. I was constantly tempted to close my eyes and experience the story that way, but ultimately decided to let the film show me what it wanted to show me. I guess the point is that I was tempted to induce blindness to possibly enhance the experience. Many scenes are filmed and scripted in such a way that, knowing the context, you very likely could get the gist of things with your eyes closed. I wouldn't recommend it on a first viewing, but it might make for an interesting experiment.

Director Fernando Meirelles is known for making very visually compelling films (City of God, The Constant Gardener). Blindness probably trumps those in terms of visual aesthetic, though it's probably not as thematically strong. The film takes a bit longer in reaching its conclusion than it maybe ought to, and there are moments where you can't possibly imagine any kind of happy ending. One does eventually arrive, and it's a fitting way to go out, but the route in getting there is a very dark experience. Blindness isn't for the faint of heart, but if you're willing to entertain its notion of apocalypse you might find that it's probably the best science fiction film 2008 has to offer. 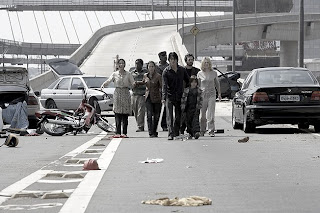