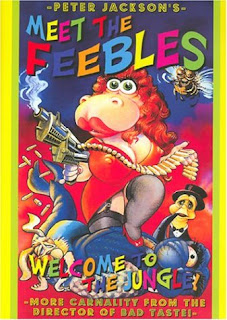 Adultery, drug deals, Vietnam flashbacks, sex tapes, homicidal rampages, and oh, did I mention it all takes place during the rehearsal of a TV variety show? If you really want a full description of the plot (and there's definitely a plot), I'll direct you to the movie's Wikipedia page.

I first discovered a copy of this at a secondhand store in 2004. This was right around the time I was really getting into the pre-LOTR Peter Jackson catalogue. Of his films, it's definitely the one I watch the least, if only because one viewing is enough to last anyone for a long time, including myself. Having said that, as I watch it tonight, I'm still surprised by how got the movie looks for being a movie featuring all puppets and shot on 16mm. 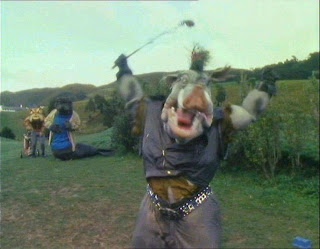 (Show me another movie featuring a warthog, a bulldog,
and a walrus playing golf. I dare you.)
Meet the Feebles is one of those movies that I'm sort of afraid to show people, because doing so might make them think I'm deranged or creepy or something. But why do I like it? Well, despite it being a completely gross, reprehensible movie, it demonstrates some of the best staging and execution of puppets that you're ever likely to see (with apologies to the Muppets).

Also, it's Peter Jackson's first real movie. As cool as Bad Taste is, the thing took him four years to make, and still has all the look of a gigantic home movie. Meet the Feebles, though, is the real deal, as strange and unbelievable as it might be. And remember, the man who made THIS, won an Oscar for Lord of the Rings.

(Rumor has it this gun was firing LIVE AMMO instead of blanks.
Peter Jackson is officially insane.)
In it's own way, Meet the Feebles is horrifying, if only for how you'll never ever look at the Muppets in quite the same way. I think it's a perfect way to kick off the Halloween season: strange, disturbing, and all kinds of fun.
Posted by JP_Wade at 11:08 PM