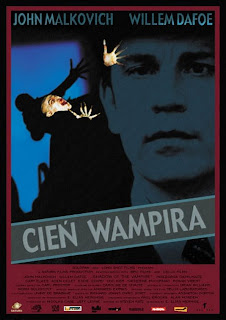 Watching Shadow of the Vampire, I'm not entirely sure who this movie is for. As a budding film scholar, I personally found the movie to be a fascinating take on the filming of F.W. Murnau's landmark film Nosferatu (1922). So the biographical aspects of the movie appealed to me, but that isn't necessarily the only way to watch the movie. It works as a biopic (though certainly taking a more fictional bent in the portrayal of Max Schreck), it works as a fun twist on the vampire genre, and it works as a drama about Murnau doing whatever it takes to make his film.

F. W. Murnau (John Malkovich) takes his film crew into Czechoslovakia to shoot his legendary, unauthorized adaptation of Bram Stoker's "Dracula", Nosferatu. The only hitch is the fact that Murnau's vampire, method actor Max Schreck (Willem Dafoe) takes the role more seriously than the cast and crew are prepared to deal with. As crew members become sick, disappear, or drop dead, those remaining begin to wonder if Schreck is, in fact an actor, and not actually a vampire. 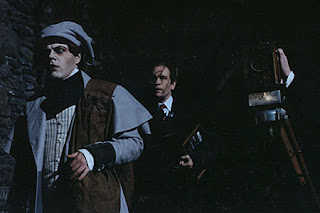 What is immediately apparent with Shadow of the Vampire is that the filmmakers are keenly aware of the traditions and techniques of the silent film era. The film itself is steeped in camera tricks, black/white photography, iris flourishes, and other cinematic devices typical of the silent era. The film looks the part, and they pull it off well. So right off, one of the key components is well in place. Also, the two leads are fantastic. While Dafoe occasionally veers dangerously close to caricature, but we've always known he could play creepy, and he does it like a pro here. From frightening glances to a voice that's like nails on a chalkboard, Dafoe makes Schreck believable, someone to truly be frightened of. However, it's John Malkovich that threatens to walk away with the film. He plays F. W. Murnau as obsessive about his work, almost Faustian in the way he bargains with Schreck to do his job. As things get bleaker and bleaker, Murnau turns almost as dark as Schreck. It's a more subtle performance, but I think all the more powerful for it.

As stated before, I don't know to what audience Shadow of the Vampire plays best to. It certainly works as a dark tale of obsessive filmmaking. To that end, it almost feels like King Kong, swapping a vampire for a giant ape. It totally works as a vampire film. Schreck's ultimate seduction of Murnau being the film's big horror hook. The film does both of these well, and can be enjoyed either way. 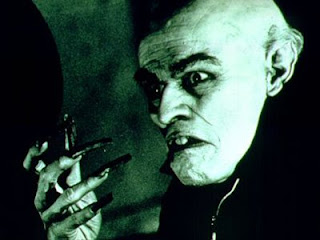 I'm trying hard to think of anything wrong with this film, and I simply can't. I know it's not perfect, but I'd dare say it's one of the quintessential vampire films ever made. It takes the concept back to its roots (almost literally). This is a vampire that feels much less like an Anne Rice character and more like the Count written of by Bram Stoker. As such, Shadow of the Vampire is definitely one to check out.