Believe it or not, I actually came to The Terminator pretty late in the game. I'd seen T2 as a kid, and was understandably terrified by it. So seeing the first film was out of the question. It wasn't until I'd gotten over my irrational fear of T2 (sadly, well into my teens) when I first became curious about The Terminator. Just as I was becoming a budding film enthusiast, I was buying up as many cheap VHS tapes as I could find at second-hand stores and watching them on a small VCR/TV I had in my room. The Terminator was one of those movies.

Where T2 was all action, effects and spectacle (with a touch of horror tossed in for good measure), I was surprised to find The Terminator was darker, grittier, and yes, scarier. I mean, it's a scifi film about killer robots from the future. It's not going to be terrifying, but there is a whole lot of tension and the fact that it's a chase film only makes it worse. Watching it today, I'm more impressed by James Cameron's eye for visual effects and plotting than I am with Arnold's character. Of course, he's the whole reason the movie works. He makes the T-101 a truly frightening character. Having said that, I really think this is Michael Biehn's movie. The majority of the movie really falls on Kyle Reese's shoulders, and he does a really great job playing the hero. 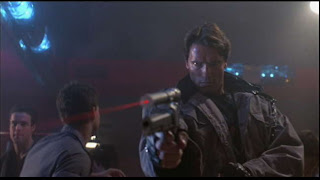 Sure, T2 is now one of my favorite films of all time, but the original has a lot more urgency to it. There really feels like the world might actually be hanging in the balance as we watch Reese and Sarah Connor wander through the night trying to hide from the Terminator. While the visual style and musical score sort of give the movie a poor-man's-Blade Runner vibe, the movie doesn't really feel like anything else of it's time. And while I'm very, very glad that T2 came along and made the franchise even better, I really can't forgive Terminator 3 and The Sarah Connor Chronicles for reducing the franchise to mindless schlock. I have a little hope that Terminator: Salvation might change all that, but I'm not holding my breath.

Overall, I'd probably not call The Terminator a great horror film, but it's certainly one of the best sci-fi/action movies of the decade. Just like James Cameron's other two big '80s sci-fi movies: Aliens and The Abyss. Finally, for a little lesson on the movie's influence (even before T2 ever happened), check this out: 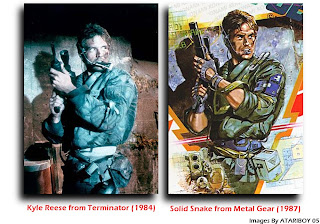