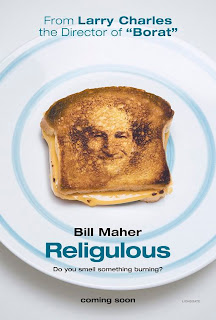 Your tolerance for Bill Maher and Borat director Larry Charles' documentary about poking holes and shedding some doubt on organized religion is likely going to be entirely based on your religious persuasion. I have my beliefs, but am not against considering alternatives or refuting everything entirely. So if you're like me, you'll enjoy Religulous, if only for all of the jokes, snarky comments, and facetious arguments that Maher provides along the way.

Maher's goal, he states at the beginning of the film, is to better understand all the intricacies and odd nuances of organized religion. Along the way, he targets Catholicism, Evangelicalism, Mormonism, Scientology, Judaism, and Islam. One of Maher's big arguments throughout the film is the notion that doubt breeds discussion. By allowing his interviewees to speak their piece with little prompting or baiting, Maher draws some a wide variety of responses; some truly odd, some downright frightening. Take, for instance, the museum curator whose prehistoric museum (which depicts early man's coexistence with dinosaurs) includes a model triceratops wearing a saddle. And this is presented as fact. 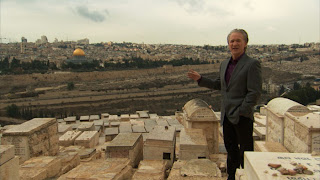 While most of what Maher and Charles offer us is often hilarious, it very rarely is eye-opening or informative. Now, this wouldn't necessarily be a problem, but this is a documentary we're talking about here. By its very nature, we're meant to learn something from it. Maybe some people of a particular faith might learn about the ins and outs of other religions, but the point of the piece is to prod, poke and scrutinize each of the religions it encounters. While Maher's jokes are well-timed and certainly very funny, it doesn't really make the documentary any more informative. Only when Maher turns his eye toward Islam does the film take a staunchly preachy tone, as he eventually declares all religions, not just Islam, as dangerous to mankind's existence on this planet. Its clear that Maher is shying away from taking potshots at the Muslim community, but was it necessary for him to instead end the film in a tirade?

The film feels very much like a personal journey (in fact, the film's codename during shooting was "A Spiritual Journey"). Bill Maher's intent at the beginning of the film is not necessarily how he comes to end the film. It sort of feels like an essay that comes to define itself and change it's thesis as it goes along. As I stated before, what you take away from Religulous depends entirely on how seriously you take religion. As a film that stands on its own and purports to be a documentary, I found more comedy than documentary. The topics that Maher chooses to poke fun of aren't anything I didn't already know, and I'm willing to bet the same can be said for most people. Therefore, what is the real point of the film? 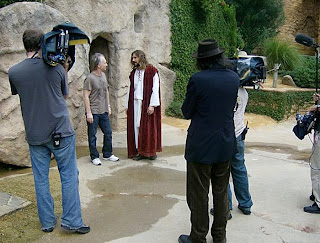 (Here, Maher interviews an actor portraying Jesus at The Holy Land Experience theme park in Orlando, Florida.)
Does it entertain? Yes. Is it informative? Not really. Will it offend? Almost certainly. Then again, what film about religion doesn't end up making somebody angry?