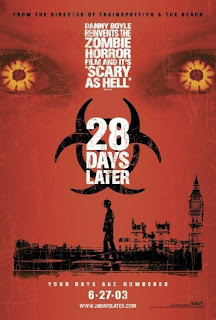 I was first exposed to 28 Days Later during my brief stint at the NC School of the Arts. I remember a whole bunch of my fellow student filmmakers flocking to the theater to see this great, new spin on zombie movies. Or something. Back then, horror really wasn't my thing, and I didn't much care for it. So I took a pass. Cut to 2004, the year of the Dawn of the Dead remake and Shaun of the Dead. All of a sudden, I'm fascinated by zombie flicks. So I decide to check out 28 Days Later.

What I expected was a cheaply produced, gimmicky horror movie with little in the way of actual plot. What I GOT was a horror movie that knew exactly how to go about putting the screws to the viewer within a scenario that still today seems very, very plausible. Of course, a virus that turns people into rage-infected killers is pure science fiction, but the way that Danny Boyle sets up his film is what hooked me. Typically, post-apocalyptic films will show you the world in the process of ending, with mass hysteria, people fleeing into the streets screaming, cities burning, that whole bit. But in 28 Days Later, what you see is a world where the world has already ended, and survivors struggle to pick up the pieces (and, y'know, survive). 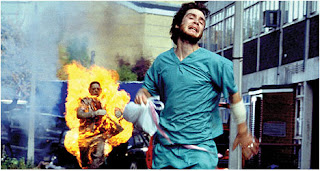 Watching it again tonight, the first time in four years, I'm less invested in the story and more interested in the aesthetic of the piece. For a movie that was famously filmed on prosumer Canon video cameras, a number of the shots are really gorgeous. The wide vistas of open landscape, city streets, and long highway shots go a long way in establishing just how desolate the Britain landscape has become since the outbreak, and work to connect us with Jim (Cillian Murphy), Selena (Naomie Harris), and Frank (Brendan Gleason) more than we might have had the film followed a scheme of tight closeups and static shots. Speaking of which, with the cameras light and free to move, the film really, really moves. Fast camera motions and faster editing do a great job of keeping pace with the film's plot.

Of course, the one thing that didn't sit well with me in 2004 still bothers me today. The whole final act that takes place in the military compound is protracted and strange. I get the commentary that Boyle's trying to work with, it's something that was maybe done a little better in Day of the Dead (more on that film soon...). Christopher Eccleston is good as the outfit's leader, he's fittingly deranged and aggressive. But once the film goes this direction, it veers off dangerously into Rambo territory as Jim becomes quasi-feral and almost zombie-like in his rescue of Selena and Hannah (Megan Burns). It never quite fit with the rest of the movie. 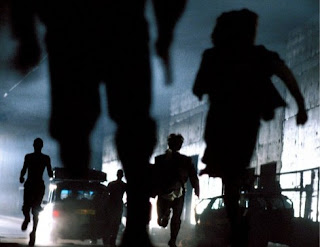 I guess what I'll leave you with is the fact that as good as the characterization and aesthetic is in 28 Days Later, the thematic and horror elements work much, much better in the sequel, 28 Weeks Later.
Posted by JP_Wade at 11:45 PM