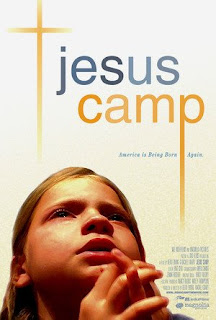 I thought I'd toss in something a little more tangible tonight. I wanted a documentary that would expose the disgusting truths behind some of the more radical among America's Christians. So I chose Jesus Camp. In retrospect, maybe I should've chosen something more along the lines of Deliver Us From Evil. That's at least a subject everyone can agree upon.

Jesus Camp shows us the members of an Evangelical church that bring their kids to a camp called "Kids on Fire", where they are preached, lectured, and engendered into "God's Army". Over the course of the film, we meet some of the kids attending this camp, and learn that they have, more or less, been indoctrinated with this particular faction's beliefs to a frightening degree. The kids treat what they've been taught as the only way there is, and everyone else must be wrong, just as their parent have taught them. The film takes it's darkest turn as we begin to see just how certain these people are that they will bring about a change in American democracy through their faith. 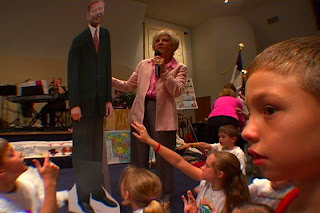 The thing to keep in mind about this documentary is the fact that we are only seeing the lifestyle and school of thought of one branch of born again Christians. They don't speak for all Christians, they know it, and other Christians know it. But what makes Jesus Camp alarming is just how fanatical these people come to present themselves. The kids in this film are never once encouraged to question the things they're being told. The concept of questions is in no way ever mentioned. I don't want this to end up with me on a soapbox, but it comes dangerously close to the kind of blind faith that they themselves criticize radical Islamists for following.

One of the salient points that directors Heidi Ewing and Rachel Grady bring up is the danger that fanatical groups like this pose to the American notion of religious freedom, the melting pot, and the very multicultural idea of acceptance and tolerance that most other Christians tend to agree upon. It's scary watching these kids scoff at science for proving nothing, being encouraged to speak in tongues after being told that Harry Potter is evil, and watching as this camp's pursuit of purity and religious solidarity is inevitably corrupted by brand names, worldly indulgences (like using car washes), and other tiny hypocrisies that never once cross their minds, and are never brought up for discussion in the film. 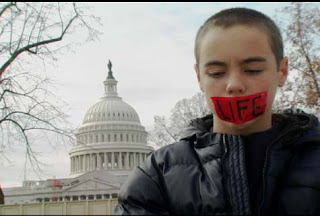 The film is certainly compelling. Ewing and Grady keep their observances evenhanded. A born again Christian could easily watch this film and see a lot of positive things, whereas most other Christians, as well as agnostics, athiests, and people of other religions can watch this and see a frightening trend in American Christianity, and the threat it poses to future politics. The directors could have probed their subjects a bit closer, though it might have resulted in tipping the even balance that the film so carefully strikes. Jesus Camp is scary. It's also very real.