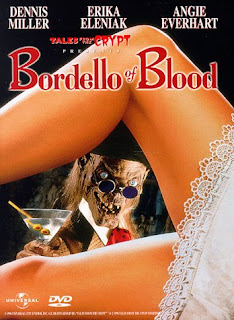 Here's another film that I remember seeing on Comedy Central a lot as a kid. Watching it again now (the first time since seeing it on cable way back 10 years ago), I have to imagine it was edited to death, because there's certainly a lot of sex, violence, and profanity. Which isn't necessarily a bad thing, but not the kind of movie you expect to see on basic cable.

Anyway. This was the second film released in an intended Tales From the Crypt trilogy. The first being Demon Knight, and the third film, Ritual, went straight to DVD in the US in 2006, even though it was filmed and released internationally in 2001. Bordello of Blood tanked at the box office, which caused the studio to hold off on Ritual. When delinquent Caleb (Corey Feldman) goes missing, his sister (Erica Eleniak) hires a private detective (Dennis Miller) to track him down. He soon discovers the guy in a brothel being operated by the vampire queen, Lilith (Angie Everhart). There's also a weird subplot about a guitar-playing televangelist (Chris Sarandon), who ends up tying into the plot in some odd ways. 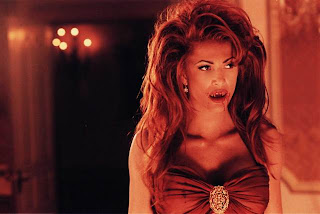 Overall, watching this again, my opinion of it hasn't really changed. When I was 12, I remember thinking all the sex and gore was cool, but didn't really see much point to it. Now, I like it a little more. Sure, there's more nudity, violence, and profanity on the DVD, but to me that's all kind of ancillary. I at least expect it to be violent. It is a vampire movie, after all. The movie really lives and dies with Dennis Miller. If you like the way he snarks his way through a script, then you'll probably enjoy the movie. If you think Miller is as interesting as watching paint dry, the movie might not do anything for you.

Personally, I'm a fan. He makes the movie watchable. Without Dennis Miller, Bordello of Blood is really kind of an awful movie.
Posted by JP_Wade at 9:05 PM