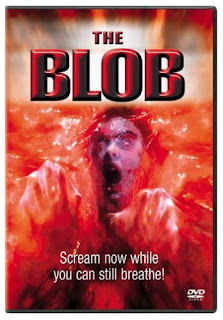 These days, the rule for horror films is generally that remakes are almost uniformly terrible. But in the '80s, decent remakes were the rule rather than the exception. The Thing. The Fly. The Blob. As far as '50s sci-fi/horror goes, the original version of The Blob was fun and offbeat, if not necessarily scary. However, Chuck Russell's remake is gory, frightening, and even kind of funny in its own bizarre way.

After a mysterious meteorite falls on the outskirts of Arborville, Colorado, people start dying as a gelatinous blob from within the meteorite begins eating the residents alive. The police are immediately suspicious of Brian Flagg (Kevin Dillon), a loner teen who always seems to be on the wrong side of things. Flagg soon acquits himself when he and fellow escapee Meg (Shawnee Smith) discover a team of military scientists in biohazard suits inspecting the meteorite. Turns out the blob evolved out of a biological weapon being developed to fight the Russians. Flagg and Meg then must race back to town to inform everyone before A) the blob kills everyone in town and B) the military rope off the town and let the blob do its business. 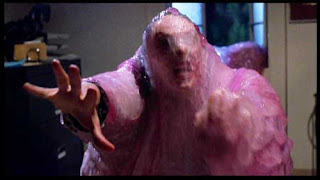 What's immediately apparent about The Blob is that it subscribes to the same school of horror as films like Gremlins, The Monster Squad, and the Nightmare on Elm Street sequels. Play fast and loose with the genre, have fun with the conventions, offer some unique kills/gore/effects, and for God's sake, scare us a little! The Blob does just that. The first two or three kills are very unexpected, and nearly all of them are unexpectedly violent. Chuck Russell definitely knows what he's doing with visual effects here, and any unconvincing shots are simply badly aged rather than poorly executed.

Where the film tends to wobble is in the cast. Nobody is truly bad here, but Kevin Dillon and Shawnee Smith didn't win any awards for this film for a reason. Art LaFleur has a fun bit part as Meg's pharmacist father, and Jeffrey DeMunn appears here in his first of many films based on Frank Darabont scripts (see also: The Shawshank Redemption, The Green Mile, The Mist). 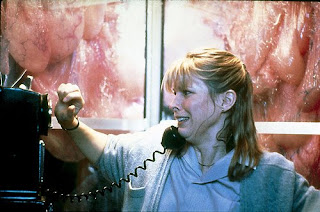 Perhaps the most interesting aspect of the film (and by no means a spoiler, because the film is pretty open about the fact) is the fact that the blob is a military weapon gone horribly wrong. Back in 1988, the Cold War was by no means over, and the idea of inventing new weaponry to fight the Russians was still a viable plot device. In the film, they state that the blob originated as a sort of biological weapon, but in the coldness of space, it evolved into the gelatinous blob in question. It's still a bit too sci-fi to ever be considered feasible, but it's a fun idea to think about.

Ultimately, The Blob is a lot of fun if you like your horror slightly goofy while still gory and disgusting. That fits me to a T.