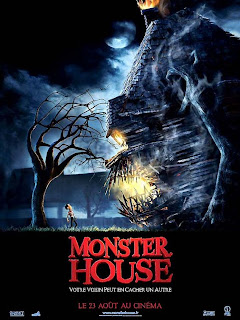 2006 was not a good year for animated films. Cars was PIXAR's singular failure, and with bad-to-average movies like Everyone's Hero, The Ant Bully, and Barnyard, Monster House seemed like a shining beacon of animation. For my money, this is the movie that should've won the Best Animated Feature Oscar in 2006. Sure, Cars and Happy Feet are more photo-real and have better effects teams behind them, but Monster House is the most visually interesting of the bunch.

So why Monster House? A number of reasons: It takes place on Halloween, so right there, it qualifies. The movie is about a possessed house. It's a house that eats people. It's like a kid-friendly version of Death Bed: The Bed That Eats. It's not exactly scary (maybe to younger kids), but it's got a great, creepy atmosphere to it. Also, it's short and I felt like watching something short tonight. 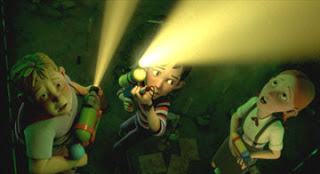 I really don't have too much to say about Monster House. It's only been a couple years since it came out, but I've sorta dedicated myself to watching it at least once a year around Halloween. While it's certainly not a very scary movie, one thing it definitely is is funny. It's veeery funny. The kind of humor that might actually go over most kids' heads. Subtle jokes that are funnier on repeat viewings. That's the kind of movie Monster House is. It's a movie that takes harkens back to a time when children could be in mortal danger in movies and that was ok. It knows its roots and it plays to that audience wonderfully. Check it out.
Posted by JP_Wade at 11:31 PM