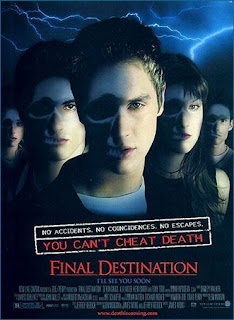 Okay, down to business. It's really too bad that the Final Destination series slowly deteriorated as most horror series tend to do. The first film brought a welcome change of pace to the slasher genre (as far as I'm concerned), and since then the deathtrap scenario flick has been beaten into the ground by its sequels, and three too many Saw films (soon to be four). Of course, if you really want to get technical about it, Final Destination is more or less a Faces of Death film crossed with The Dead Zone.

The first in the Final Destination series the best overall movie (though that's not really saying much), though the kills and deathtraps are more intricate and better executed in the two sequels. Just like the Saw series, I fail to see how this series can continue without inevitably repeating itself. Not sure if the world truly needs a Final Destination 4, but...um...I don't know. How awesome is that plane crash scene?