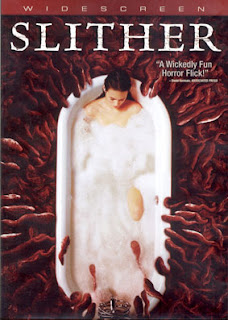 You know what's awesome? Slither is awesome. It's a great homage to '80s horror movies like The Blob and Night of the Creeps; James Gunn's writing and direction is very funny; Nathan Fillion, Elizabeth Banks, Michael Rooker, Gregg Henry, they're all hilarious in the movie. It's a real shame that the movie bombed as badly as it did, because true horror-comedies are few and far between these days, and movies like this and Shaun of the Dead just prove how great the genre can be when handled properly.

A couple years ago, a professor of mine referred to Slither as "an insightful commentary on the state of modern marriage." I'm not sure how 'insightful' the movie really is, but he's got a good point. If not for the weird relationship between Grant Grant (Rooker) and Starla Grant (Banks), the movie would only be half as interesting as it is. 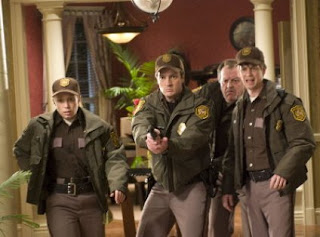 The other thing worth noting about Slither is how incredibly funny the whole thing is. The DVD commentary with Gunn and Fillion is great, as are a lot to the behind-the-scenes features. The deleted "Meat Filing" scene really has to be seen to be believed.

So to sum it all up, go check out Slither. It's disgustingly gory, with some really great makeup effects, but if you can get over that, there's really a lot to love about the comedy. 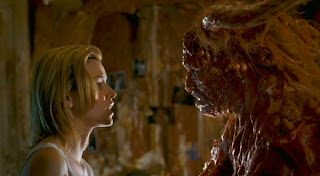