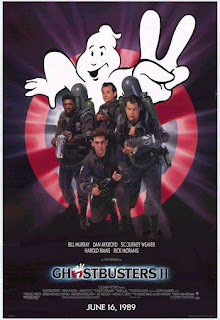 (I know, I missed yesterday too. So now I owe you two.)

Strange as it may sound, I've never actually seen Ghostbusters 2 from beginning to end. Sure, I've seen the beginning maybe a dozen times, and the middle and end just as many. But I just can't say for sure that I've ever sat down and watched it from start to finish. Which I think is weird. I can remember finding this movie on Comedy Central constantly as a kid. In fact, if I really think about it, I'm pretty sure I saw this long before I ever saw the original. If I think back even further, I'm pretty sure I was watching the cartoons long before I ever knew about the movies.

To this day, I know there's a lot of debate over Ghostbusters 2. Bill Murray didn't like the idea of a sequel to begin with, and he reportedly wasn't too thrilled with how the special effects overshadowed the comedy. Sure, I get that. But in the movie's defense, it's every bit as entertaining and goofy as the original. While a lot of sequels in the '80s tended to be sub-par in almost every way, Ghostbusters 2's only real drawback is that it's specifically NOT the first one, and just a tad on the ridiculous side. But then, there's really only so much you can do with catching ghosts before you start getting into outlandish scenarios.

It's one of the reasons why I'm sort of not looking forward to a third film. It's going to inevitably be stranger and sillier than the first two. But then, there are some things about Ghostbusters 2 that still strike me as odd. 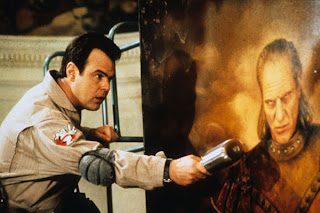 I think the underlying theme of anger, the slime representing the increasingly palpable sense of hate in the world, is an interesting theme, and one that I'm sure could've been developed a bit more. I'll bet this movie would make an interesting triple feature with Gremlins 2 and Do the Right Thing (both also released in 1989). Yeah, Ghostbusters 2 might not be as original as the first Ghostbusters, but it's still way too much fun to just disregard completely. The ghost train, the slime guns, controlling the Statue of Liberty with an NES Advantage controller, Lewis suiting up in a jumpsuit and proton pack, there's just way too much to love about this movie for me to really, truly dislike it.
Posted by JP_Wade at 11:44 PM