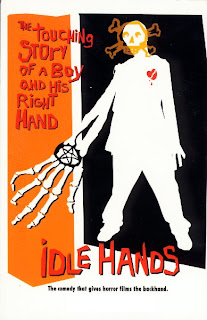 Take all the best elements of Evil Dead 2, The Frighteners, and Kevin Smith movies, boil them down to a soggy base, and I'm willing to bet the result will look something like Idle Hands, a horrible little teen horror/comedy that's about as third-rate as it looks. And look, there's Devon Sawa. Again. In a horror movie where everyone around him keeps dying. Man, I wish this guy had built a career around that. But back to business.

The movie starts with Sawa's parents (one of them played by Fred Willard, dammit) getting murdered right before bedtime by some mysterious serial killer that we never see. Cut to the next morning (or later in the week, whenever really, the movie doesn't seem to care). Sawa (from here on out, let's just keep calling him that), gets up, does his usual slacker routine, and casually comments that he hasn't seen his parents for a few days. No problem. His friends Mick and Pnub (Seth Green and Fulton Reed from The Mighty Ducks) don't seem all that phased by it either. Nor are they really that bothered when Sawa's possessed right hand brutally murders them. No sweat off their back, they decide to stick around as zombies. 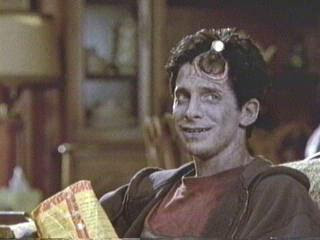 Then there's something about Vivica A. Fox hunting down a demonic force whose killing spree outlines a pentagram on her handy map of the US Southwest. She's out to kill Sawa before he can kill anyone else. And then Jessica Alba figures in as Stoner Sawa's unlikely hot girlfriend. She thinks he's weird, which totally works, because he is.

Just like it's main characters, Idle Hands is a movie that doesn't seem all that interested in either scaring you OR making you laugh. It just wants to get itself from A to B as quickly as possible. Which is perfectly acceptable. It's not that much fun anyway. I remember back when this came out, I thought it looked like it was made for the very idiots I hated in grade school. I watch it now, and I was right. It's the epitome of everything that was loathsome about late-90s pop culture. But two things save this movie. 1) Undead Seth Green is way funnier than regular, I-still-have-a-pulse Seth Green. 2) The Offspring totally get what they friggin' deserve: 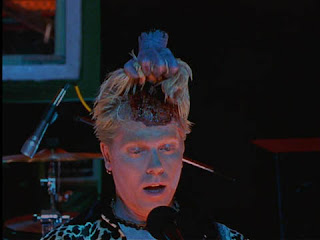