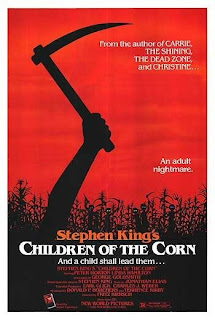 How's that for a segue? Sadly, like a lot of movies I discovered in my younger years, I was introduced to Children of the Corn through an episode of South Park. In particular: this one. Cartman screaming "Outlander! We have your woman!" is a direct reference to this scene. Eventually, my own use of this line led me to seeing the movie.

And wow. While the movie itself isn't quite as suspenseful or as full of scares as it could have been, what it is is frantic, creepy, and just plain weird. You've got a farm village that's been taken over by a cult run by a kid named Isaac, whose diction is far too good for a kid his age. Linda Hamilton and Peter Norton wander into town, run across the cult, and all hell kinda breaks loose. The kids are after the two, looking to sacrifice them to "He Who Walks Behind the Rows".

Sorta like Jesus Camp, Children of the Corn is about the dangers of cults of personality, albeit in an extreme, deranged example. It's about the distortion of religion for sick, personal gain. I'm still not sure what Isaac's objective was in leading this cult, but the body count and general weirdness goes a long way in just kinda creeping me out. 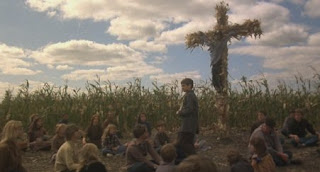 So, Children of the Corn. Not too bad. It's a smaller movie, but effective in its own evil way. I have no idea how this movie warranted SIX sequels, but this first one is at least a decent little horror movie.
Posted by JP_Wade at 11:48 PM