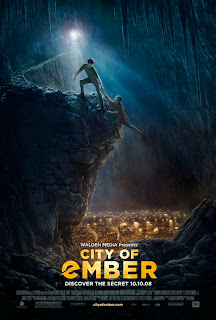 City of Ember is tanking hard and fast at the box office. Not that it's really any surprise, because it's really difficult to figure out who exactly the audience for this movie was. In simplest terms, City of Ember is a sort of post-apocalyptic tale for kids and young teens with a retro, 1950s sci-fi aesthetic and themes about learning to help yourself rather than put your faith in a troubled world. Even when worded like this, City of Ember seems like kind of a hard sell. And it is.

The movie opens and we learn a few vague details about the end of the world. We don't know exactly what ended the world, but we do know that a team of scientists designed an underground city that would serve as the incubator for mankind while the Earth spent the next 200 years recovering. The key to returning to the surface was locked in a safe and entrusted to the city's mayor, who passed the box to the next mayor, and the next, until eventually the box becomes lost to time. After 200 years, the power generators are beginning to fail and the city as a whole is beginning to break down. Enter Doon (Harry Treadaway) and Lina (Saoirse Ronan), two teenagers starting their first day as pipe worker and city messenger, respectively. Doon thinks he knows how to fix the city's generators, but at every turn his dad (Tim Robbins) and mentor (Martin Landau) tell him to just mind his own business. Lina discovers the previously mentioned safe in her grandmother's closet, and it's not long before she and Doon decide to flee the city before it inevitably goes dark forever. 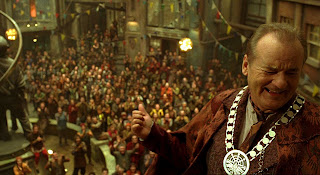 What the movie lacks in character development it more than makes up for in an intriguing story and some fantastic production design. Director Gil Kenan (Monster House) does a great job of establishing a world where Art Deco was the last thing society knew before everything went to Hell. If you've ever played the video game Bioshock, you know what to expect from City of Ember's visual style.

One of the things that the movie doesn't delve into as much as it maybe could have is the notion of autonomy and making decisions for oneself instead of letting groupthink dictate your actions. As Doon and Lina begin putting the pieces of Ember's history together, their snooping is met with nothing but denial from the city's mayor (Bill Murray) and his second in command (Toby Jones). There's also an odd thread dealing with what might as well be called the city's religion, and their annual day of singing praises to the builders of the city. The film doesn't delve into this concept very far, but then again, given the target audience, it would have either gone over kids' heads or sparked backlash among religious groups. 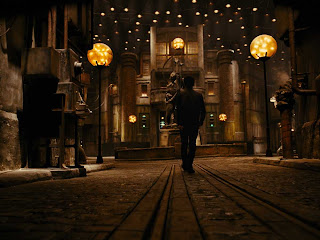 As the film is, though, it sort of plays like The Village for the younger crowd. It's not as dense as The Village, but City of Ember does deal in some of the same themes. As I stated before, the character development doesn't exactly mesh the way it maybe ought to, but the characters are at least simple enough that they don't take long to get to know. So overall, City of Ember is a beautifully shot film with some really great ideas behind it, but maybe a little light on the execution.