How to Lose Friends and Alienate People (2008) 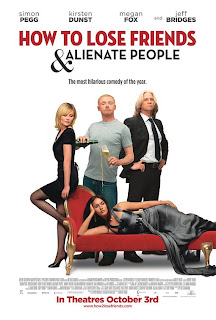 It simply has not been a good year for comedies starring British comedians. Earlier in the year, Run Fatboy Run was funny in fits and starts, and fittingly tanked at the box office. Just last month, Ricky Gervais' performance proved to be the only worthwhile thing about Ghost Town. It, too, barely registered at the box office. Now, Simon Pegg is back in another comedy, this one marginally more successful than those two, but certainly doomed to suffer the same box office tragedy.

The movie is based on the memoirs of British journalist Toby Young, of whom I'm honestly not familiar. His book, also titled How to Lose Friends and Alienate People, chronicles his years spent writing for Vanity Fair magazine. Here, Sidney Young (Simon Pegg) is hired on as a writer for Sharps magazine, run by editor-in-chief Clayton Harding (Jeff Bridges). Sidney's sole desire at the magazine is to expose the celebrity world for the shallow party it really is. And to have sex with starlet Sophie Maes (Megan Fox). Along the way, Sidney crosses paths and matches wits with fellow journalist Allison Olsen (Kirsten Dunst). 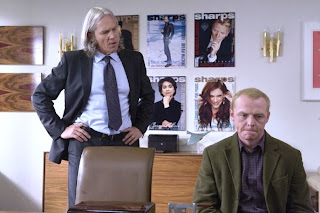 The central schtick of Simon Pegg acting like an insufferable ass is what makes this movie bearable, and ultimately saves it from being just another romantic comedy. I'm not entirely sure why screenwriter Peter Straughan felt the need to have the film switch gears halfway through, but to his credit, the romance angle at least sort of works. The cast is well chosen, for the most part; Pegg especially. Jeff Bridges and Gillian Anderson, who plays Sophie's publicist, feel underutilized, like their characters could've been satirized further.

I can't help but feel that soemthing about the movie just seems ephemeral, like it's doomed to obscurity on WGN or SpikeTV. Perhaps it's the fact that the humor feels too imbalanced. For every dry Brit-gag that Pegg executes flawlessly, there's a sight gag like a transsexual's penis (seriously, why?) that just feels unnecessary. Perhaps it's the fact that I just want more of Pegg's character antagonizing every Hollywood jerk that he possibly can. At one point, he refers to the film's token wunderkind director (Max Minghella) as an idiot who things all things cinema begin with Tarantino. If only there had been more jabs like that. 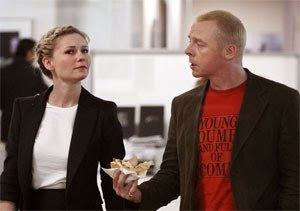 (Yes. That shirt says what you think it says.)
Ultimately, How to Lose Friends and Alienate People is likeable, though not a complete success. It's definitely funny, but the need for a romantic B-story kills any home for an anarchic finale that the first half seems headed toward. See the film for Simon Pegg's performance, and stay after the credits for a fake trailer starring Sophie Maes as Mother Teresa. It's more hysterical than most of the gags in the film. What I was hoping would be a journalism-laden take on The Hudsucker Proxy plays more like The Devil Wears Prada for guys. Of course, that's not entirely a bad thing.